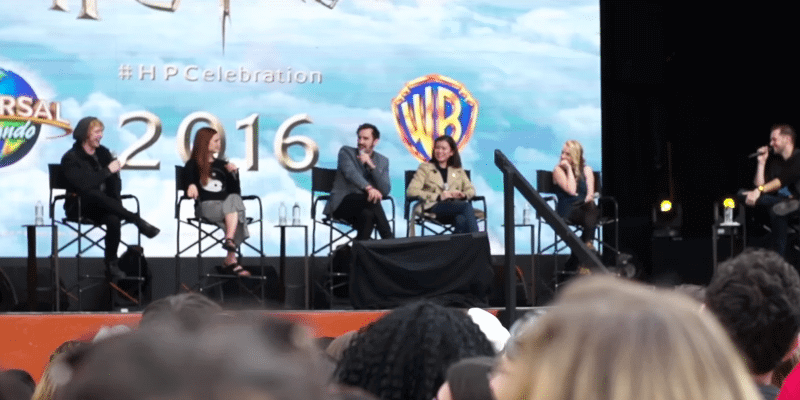 If you haven’t been to A Celebration of Harry Potter at Universal Orlando Resort, you’re missing out on one of the biggest, most magical (and official) events straight from the Wizarding World. The 2017 event will be held from January 27-29, and will feature film talent Q&A sessions, access special panels and demonstrations, and discover many more surprises. What could Potterhead ask for more?

It was also announced that this year’s celebration would be welcoming actors Warwick Davis (Professor Flitwick, Griphook) and Matthew Lewis (Neville Longbottom). Universal has specifically stated that even more stars will be announced at a later date.

Artist Draws Disney Characters in the World of ‘Harry Potter’

A CELEBRATION OF HARRY POTTER PANELS AND DEMONSTRATIONS

Enjoy a fascinating and interactive Q&A session featuring some of your favorite actors from the Harry Potter films including Warwick Davis, Mathew Lewis and more. Discover what it was like to work on the most successful film franchise in history.

Join award-winning special make-up effects artist Nick Dudman and discover how creature effects were brought to life in the Harry Potter film series. Warner Bros. Studio Tour London presents this exclusive panel with Dudman and Warwick Davis, who portrayed Professor Flitwick and Griphook on-screen. Learn about the incredible skill that went into producing iconic creatures such as Aragog, Buckbeak and the Gringotts Goblins, plus see some authentic models from the Harry Potter film series.

This interactive panel will offer you the chance to pick up your wand and take part in a live dueling masterclass, hosted by Warner Bros. Studio Tour London and featuring the world’s only Wand Combat Chorographer, Paul Harris.

Stories from Harry Potter: The Exhibition

Harry Potter: The Exhibition has the unique privilege of bringing a selection of some of the best known authentic props used to create the entire film series to fans in cities close to home. Each and every real element on display within the exhibition has a story. Eddie Newquist, creator of the exhibition, will be joined by Pierre Bohanna, head prop-maker from the films, to tell stories of how these props and costumes were selected for the exhibition and about their histories.

Miraphora Mina and Eduardo Lima, from the graphic design studio MinaLima, will share insights into their role as graphic prop designers, and how their paths crossed at the WB film studios in London while working for 10 years on the Harry Potter movies, and more recently on Fantastic Beasts and Where to Find Them. They will show some of the iconic props they created from both franchises, such as The Marauder’s Map, the Daily Prophet, The New York Ghost, MACUSA Wand Permit, and more. Additionally, they will discuss their involvement in The Wizarding World of Harry Potter – Diagon Alley.

The Harry Potter Expo will be open to Guests throughout the weekend and include the following booths and exhibits that will give fans a deeper insight into the global phenomenon of J.K. Rowlings Wizarding World.

Relive the magic through the eyes of the filmmakers who brought the Harry Potter™ film series to life at the Warner Bros. Studio Tour London. Step on to authentic sets and admire the real props and costumes used during filming. Enjoy an interactive mini-tour experience and see the behind-the-scenes talent that went into creating the iconic films.

Are you a Gryffindor™, Slytherin™, Hufflepuff™, or Ravenclaw™? At the beginning of each school year, the Sorting Hat™ places new Hogwarts™ students into a house, and now you can get sorted at a Great Hall setting. Step inside the Expo to celebrate the global impact of Harry Potter™: The Exhibition.

Celebrate Harry Potter™ at Scholastic’s booth by sharing a message about what Harry Potter™ means to you. Color in a magical page from our brand-new Harry Potter™ coloring book. Collectible giveaways are available for fans of all ages.

All weekend, Pottermore and Audible will be inviting visitors like you to participate in Audible Recall – the ultimate audio challenge that decides who knows the wizarding world inside-out and who has a bad case of the wrackspurts. Pottermore will also bring you the latest news and announcements directly from J.K. Rowling’s Wizarding World.

Wave a wand to explore the magic of Newt’s case from Fantastic Beasts and Where to Find Them in virtual reality. With Daydream View, Google’s newly launched VR headset, you can cast spells and solve puzzles to explore the world of the film in virtual reality. Step inside this interactive experience and follow along as Newt narrates your encounters with some of his favorite beasts.

Here’s some more information on a special vacation package straight from the folks at Universal Orlando Resort:

Stick with Inside the Magic for all news on A Celebration of Harry Potter!