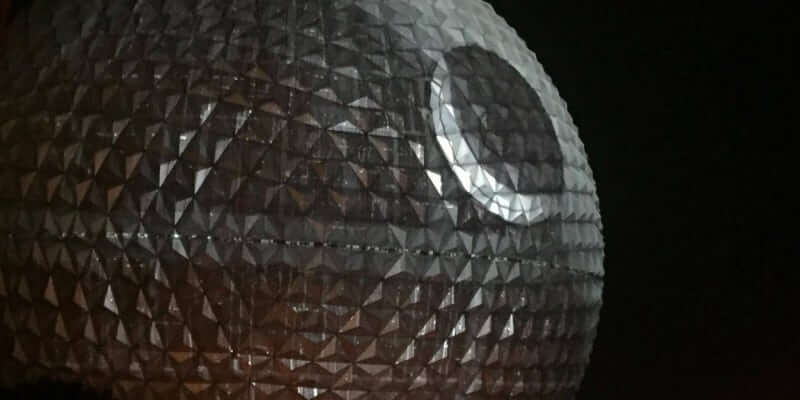 During a special event at Epcot in which the theme park’s iconic attraction Spaceship Earth was temporarily transformed into the Death Star to celebrate Rogue One: A Star Wars Story, Walt Disney World announced several new additions and enhancements to the Star Wars experience coming soon.

Check out ITM’s videos of the incredible Death Star in action as well as actor Mads Mikkelsen’s surprise appearance at the special one-night-only event.

Starting soon at Disney’s Hollywood Studios, the AWR (Advanced Weapons Research) Troopers from the newest film in the galactic saga will make their debut at Hollywood Studios roaming the premises as well as a new addition to the “Star Wars: A Galaxy Far, Far Away” daytime show. Related movie props are already on display at Star Wars Launch Bay (both in Hollywood Studios and at Disneyland in California), including a Shoretrooper Blaster, Director Krennic’s Imperial Shuttle, a Death Star model, a U-wing gunship and more.

The fan-favorite “Star Wars: A Galactic Spectacular” fireworks show will make its welcome return Dec. 16, where it will join the current holiday show “Jingle Bell, Jingle BAM!” show every night through Dec. 31.

Star Wars: A Galactic Dessert Party will also return in 2017. For more on this delicious offering, the Disney Parks Blog has all the info:

This offering includes Star Wars-themed cupcakes, cookies, brownies and a selection of savory snacks including cheese and flatbread and dip (as well as alcoholic and non-alcoholic beverages). The night ends with special VIP viewing for the night’s “Star Wars: A Galactic Spectacular.” (More on how to book this experience here).

Most intriguingly, the announcement of a deluxe Star Wars Guided Tour to come in the near future will involve all related experiences at the theme park including the Jedi Training: Trials of the Temple show, Star Tours and Launch Bay. Also included is dinner at a quick-service restaurant featuring Star Wars-themed items and the Star Wars: A Galactic Dessert Party along with the priority fireworks viewing. The tour will last seven hours and will led by a Star Wars “all-in-the-know” tour guide, according to the Disney Parks Blog.

Keep it here at ITM for more updates on this story as well as coverage of these new and returning Star Wars experiences coming to Disney’s Hollywood Studios at the Walt Disney World Resort.