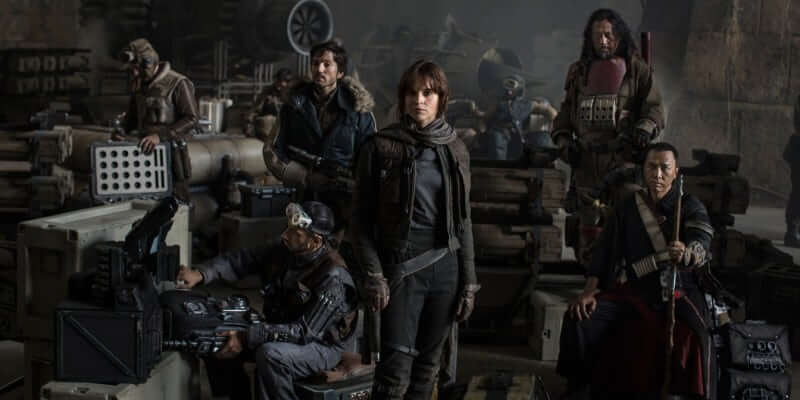 The Rogue One Preview Gallery has made its way to Disney’s Hollywood Studios. True to its promise, Star Wars Launch Bay–located within the park–is celebrating not only the past films within the Star Wars saga but also those that are still ahead.

In the single room devoted to Rogue One is a handful of artwork and replicas of wardrobe pieces and weaponry as well as a few models of the familiar battleships. Some of the most notable pieces are headpieces, and there are two. The first is a Death Trooper Helmet, and it is fierce. If a stormtrooper and Darth Vader had a baby, it would look like this helmet. The second headpiece on display is that of the heroine, Jyn Erso. The “standard issue” rebel gear of insulated head covering and goggles are definitely reminiscent of Luke Skywalker’s headgear when he visited Hoth. Two uniforms stand across the room from each other almost as if in a stalemate. One on the rebel side, is an Imperial Tech Uniform that Jyn Erso wears in a risky maneuver to infiltrate Imperial territory. The other is that of a Shoretrooper, specialist stormtroopers that patrol the beaches of the Imperial’s military headquarters on Scarif. Looking as if it has seen better days, this uniform definitely gives a sense of the harsh conditions that these soldiers have to endure to perform their duties. The weaponry is also another important element in the gallery. There are three pieces on display. First, is a Cassian Andor Blaster. Set up next to Jyn Erso’s headgear, it is described as a “modular construction that allows a core pistol to be reconfigured into a sniper or assault rifle.” Ummm…yikes! Equally–if not more–intimidating is the Shoretrooper Blaster. This baby uses double barrels, making it more destructive than the standard stormtrooper blaster. And the last piece of weaponry seemed a bit more “time-honered”–the Chirrut Lightbow. It is said to be a “complicated form of bowcaster native to Jedha and the traditional hand-crafted weapon built by the Guardians of the Whills.” Right! What is even more obvious is that you don’t want to be standing on the wrong end of one. With the epic soundtrack of the Star Wars movies playing in the background, this preview gallery certainly gets you excited for what is about to happen to theaters across the globe in a few weeks. Make sure to get a glimpse of everything if you have the chance to do so at Star Wars Launch Bay in Disney’s Hollywood Studios.