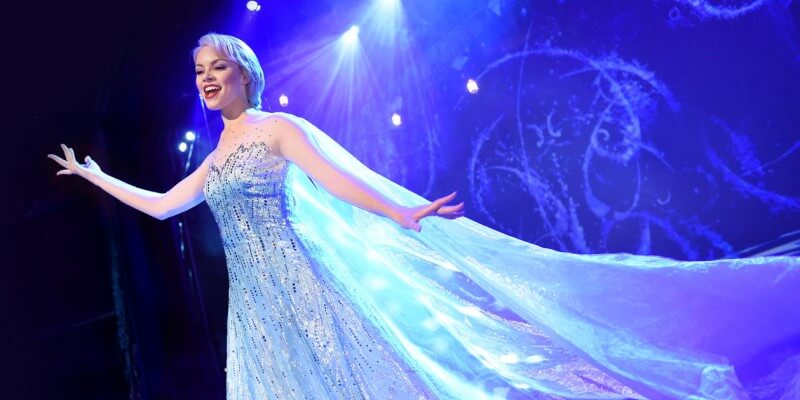 It’s no secret that Walt Disney World recent animated classic Frozen  is quite the top seller, even a few years later. The property has grossed Walt Disney World Corporation millions and millions of dollars, and continues to entertain children and families of all ages.

Now, ITM’s Audra Stafford had the opportunity to get a “first time in forever” look at the newest staged representation of the land of Arendelle, Frozen, A Musical Spectacular. The show will appear aboard the Disney Wonder starting November 10, and will feature a full representation of the film with all-new choreography, amazing talent, and charm to spare — all from the awesome folks at Disney Cruise line!

Here’s what Disney has to say about the production via their official website:

A Tale of 2 Sisters

Behold a heartwarming yet humorous, full-length retelling of Anna and Elsa’s Frozen adventure in Arendelle.
Based on the hit Disney animated movie, Frozen, A Musical Spectacular revisits the captivating escapades of royal sisters Anna and Elsa when an accident as children changes their lives—and their relationship—forever. Estranged from her sister as an adult, perpetual optimist Anna sets off on an epic journey to find Elsa, whose icy powers have trapped the kingdom of Arendelle in eternal winter.

Encountering white-out conditions, mythical trolls and a not-so-charming prince, Anna battles the elements in a race to save her sister and the kingdom, while discovering the true meaning of sisterhood, inner strength and love along the way.

Songs to Melt a Frozen Heart

Frozen, A Musical Spectacular features many of the songs you’ve been singing since you saw the movie for the very first time. Tunes from the iconic score you’ll see performed include:

With choreography by Josh Prince and under the musical direction of Marco Paguia, the show includes classic songs from the hit film that remain true to their original arrangements, although some have been expanded into ensemble pieces while others have transformed into lavish production numbers, allowing you to experience the story in a fresh, new way.

Sets
Scenic designer Jason Sherwood and projection designer Aaron Rhyne—combining the latest in motion-tracking video graphics with large-scale mobile set pieces—construct the majestic kingdom of Arendelle and its surrounding locales from the ground up, completely immersing you in the windswept world of Frozen.

So what do you all think? Are you ready to embrace Frozen once again, this time aboard the high seas? Let me know in the comments below, and stick with Inside the Magic for all things fun and awesome!