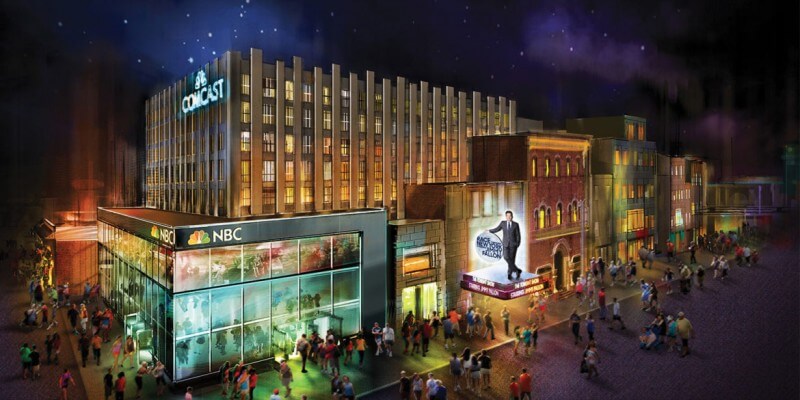 Universal Orlando Resort will be opening up their latest attraction Race Through New York Starring Jimmy Fallon next Spring and today they’ve pulled back the curtain to reveal new details of the ride along with concept art of the outside area that has replaced Twister.

Among all the new tidbits about this curious new attraction over at Universal Orlando’s official blog, we now know that guests in the queue area will be “hanging out” at Studio 6B Club where they’ll enjoy a performance from the Ragtime Gals barbershop quartet, meeting “Tonight Show” mascot Hashtag the Panda, and enjoy classic moments and hilarious bits from the legendary show. You’ll even be able to sit behind an “Interactive Desk” and be the host as you send out personalized “Tonight Show” Thank You Notes to your friends and family as well as warm up your driving skills with a ‘Jimmy Drive’ retro-style video game.

Guests will be treated at the NBC Studios to the history of the classic show throughout its 62-year run and they’ll be able to view real set pieces and memorabilia from the “Tonight Show,” including a display honoring Fallon himself. Here’s where it gets interesting, with new details on the actual ride:

After a briefing in the Studio 6B Lobby, you’ll board the world’s first-ever flying theater, which seats up to 72 audience members, for a rousing race alongside Jimmy Fallon through the greatest city in the world, New York.

From 30 Rock out into the streets (and the skies!) of The Big Apple, you and your fellow studio audience members will zoom past iconic New York City landmarks in an action-packed race with plenty of twists and turns along the way.

Be sure to keep an eye out for cameos from familiar characters like Sara from “Ew,” Jimmy in “Tight Pants,” and “Tonight Show” announcer Steve Higgins. All the sweet sounds of New York will come to life with the help of the Grammy award-winning band, The Roots, the musical masterminds behind the original attraction score.

If that’s not all they’ve also released a behind-the-scenes video of the making of the new Universal Studios Florida attraction.

Universal Orlando Resort guests will soon be able to experience the ride for themselves when Race Through New York Starring Jimmy Fallon officially opens next Spring.