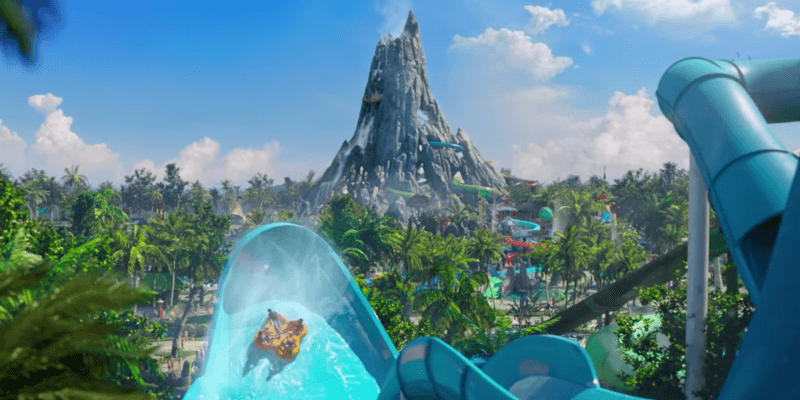 Universal Orlando Resort hit the internet with all the fury of a lava-slide yesterday, releasing a ton of massive new details about their new waterpark, Volcano Bay. While the promise of magnetic technology and quality attractions were certainly eye-opening, one bit of information really stood out for me: “Virtual lines”.

Using what they call a TapuTapu Wearable, guests will be able to eliminate long lines in favor of focusing on having a grand ‘ole time. Basically, we will all be able to virtually wait in line while enjoying other areas of the park, and the device will alert you when it’s time to ride so you can head back to the attraction (like holding a buzzer at a restaurant). With some notable and significant differences, this sort of technology should seem relatively familiar to MagicBand users at Walt Disney World. Users will also have the ability to utilize the device to interact with various environmental objects for a little bit of extra fun. Wow. That’s a lot at once, right? If you think about it, guests are being asked to completely rewrite the way they enjoy their day at a theme park.

But why is this significant? What makes the idea of not waiting in lines not only wildly appealing, but possibly necessary in the evolution of the theme park industry as we know it? The truth is, only time will tell how this story ends. But that doesn’t mean we can’t talk about it for a little bit:

I’ve had some pretty great times waiting in lines to get on a ride. Who doesn’t love being in a small group of people when one of your friends whips out their phone and suggests a game of Heads Up? But the truth is, you don’t go to theme parks to wait in long lines: you go to experience the attractions in all their glory, and then swiftly move onto the next one. So if you want the most out of your day, the concept of Virtual Lines seems like a no-brainer. Just look at how Disney has enhanced their guest experience with the FastPass+ option — now imagine that as a free service for all guests, unlimited access for the entirety of your time at the park. Kind of sounds like a bright future, huh?

It may seem like a bit of a stretch on paper, but the truth is with less people waiting in lines, more attention can be paid to the various environmental and sidestreet entertainment that every single theme park provides in spades. As a result of people spending less time waiting in lines, they may find themselves actually utilizing that time to take in the ambience of the world around them. And if more attention is being paid to street shows, that could virtually usher in a new era of additional talent and new ideas. Those new ideas could mean more jobs for performers, which is fantastic.

Granted, to expect theme parks to completely wipe out all of the queues (many, extremely creative) they’ve so lovingly built to house hundreds and hundreds of people would be absurd. So instead…

Why not a mix of both?

What if guests had the opportunity to choose whether they’d prefer to wait in the queue or schedule their times accordingly? Universal’s Volcano Bay has the advantage of being a new park that can implement fresh technology from the get-go, but they can’t just wipe out Michael Aiello’s amazing Skull Island: Reign of Kong queue at Islands of Adventure in favor of literally no lines whatsoever. It’s just not practical.

So the solution would be to simply offer guests the Virtual Line service along with the option to experience queues if you so choose. But either way, guests would have the ability to schedule their time on the rides as needed. While they are waiting for their scheduled time for one ride, they can wait in the line for another. Attendees of Walt Disney World have been doing this for years now with great success.

Here’s the promotional video, showcasing the TapuTapu Wearable used to interact with the environment:

No matter how you slice it, Virtual Lines are a bold move and adventurous step forward for Universal Orlando Resort. With the emphasis on convenience and the overall guest experience, a welcome side effect of the announcement of this technology is an unexpected feeling of comfort and respect. They want us to experience it all, and without the eye-rolling tedium of spending up to an hour in the hot sun waiting for an attraction you had already paid good money to experience.

From a public relations standpoint, it’s a winner. From a technological standpoint, well, I guess we’ll have to wait and find out!