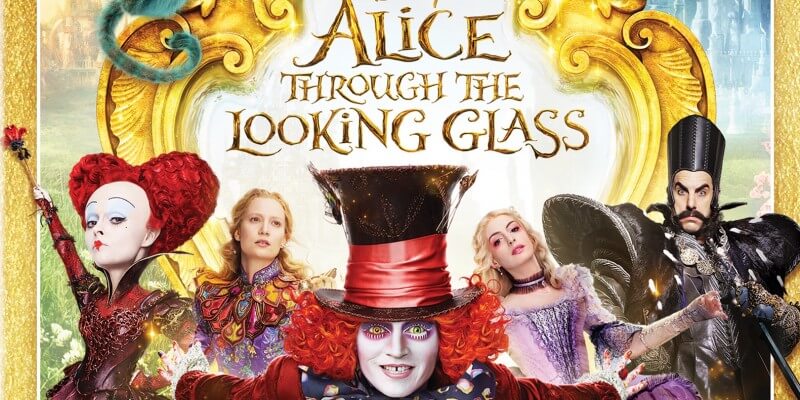 While Alice Through The Looking Glass, the sequel to Tim Burton’s 2010 smash hit “Alice In Wonderland,” didn’t come close to matching the original’s monster box office numbers and was initially met with mixed reviews, many films find new lives by becoming beloved over the course of time through their home video release.

Speaking of time, it is the central figure in this updated take on the 1871 Lewis Carroll classic novel with new characters mixed in with the originals. As explained in the making-of special feature “Behind the Looking Glass,” Burton would draw liberally from both of the first two Carroll books when creating his live-action take on “Alice,” leaving new director James Bobin to pick and choose which characters to spotlight in this new film. While the sequel may not be everyone’s cup of tea, the sheer creativity of the special effects as well as in the making of some of the physical sets is made clear in this special feature.

There’s a bevy of further special features to dig into, including audio commentary from Bobin, five deleted scenes with optional director’s commentary as well as an imaginative Pink music video with its own behind-the-scenes featurette.

I rather liked the “Characters of Underland” bonus feature with its look at the smaller characters that inhabit the fantasy world. It also includes a touching moment where we see Alan Rickman, in one of his final performances, in the studio to work on voicing Absolem the Caterpillar. In true Sacha Baron Cohen fashion, there’s also an amusing short interview with him in character as Time.

Perhaps the best of the lot is “A Stitch In Time: Costuming Wonderland” in which we get to see the inspiration behind the designs and a close-up look at the attention and care paid to these incredible costumes, who play as big of a part in the overall look of the movie as anything or anyone else. Many of the amazing handmade details in each of these costumes are simply lost on camera within the flow of the film but once you see them in this mini-doc it’s fun to try to spot them again in the actual movie. The movie itself looks fantastic and the 5.1 surround sound really adds punch, especially during Alice’s battle with the Minutes and when she travels in the Chronosphere. (As has been the case with Disney’s home video releases such as “Star Wars: The Force Awakens” and “The Jungle Book,” if you have a 3D TV you may want to hold off on this initial edition.)

Click here to read ITM reporter Mike Celestino’s original review of the film as well as in-depth look at the process of making the sequel with the cast and creative team.

“Alice Through The Looking Glass” is now available on Digital HD, Blu-ray and Disney Movies Anywhere.