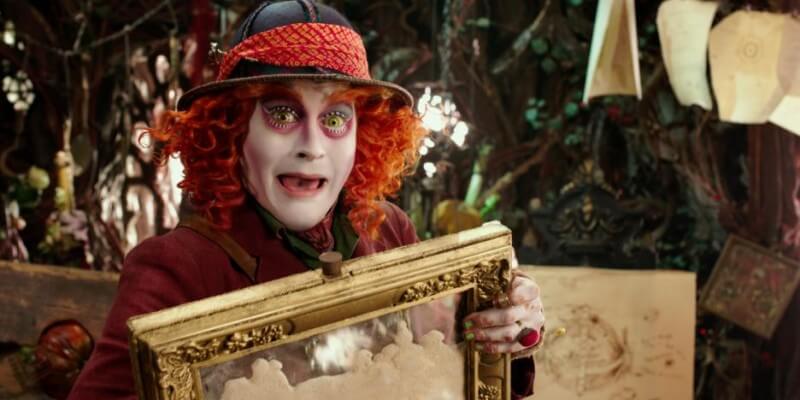 I’ll be the first to admit I’m not the target audience for “Alice Through the Looking Glass.” I didn’t care much for the first entry in the series (2010’s “Alice in Wonderland,” directed by Tim Burton) and in general I’m not a fan of movies that are over-reliant on manic CGI characters to populate their worlds, or that bend over backwards to give iconic characters unnecessary backstories. Let’s just say I suffer from an ongoing case of post-traumatic Jar Jar Syndrome.

With that in mind, I did my best to approach this movie with an open mind. I’ve enjoyed new director James Bobin’s previous work (2011’s “The Muppets”,” “Flight of the Conchords”) and I like the cast, most members of which are returning from the previous film. And for the most part, once the credits had rolled, I walked away fairly entertained.

The movie is jam-packed with nifty visuals and a surprisingly complex story involving time travel and a conflict involving the personification of Time itself. That character, played by “Borat” star Sacha Baron Cohen, is the biggest new addition to the cast, and easily the best part of the movie.

As he tends to do, Cohen made some interesting choices for his performance that made me chuckle and appreciate his presence. About two minutes into his screen time, it dawned on me he was doing an exaggerated but unmistakable vocal impression of filmmaker Werner Herzog (“Grizzly Man”) and that realization cracked me up for the remainder of the movie. Time isn’t so much a villain as he is a neutral, omnipotent force in Wonderland. He gets to decide when people die, but he isn’t biased about it. The character also employs a ragtag group of steam-punk henchmen called “Seconds,” which at first glance are very reminiscent of Universal’s “Minions” characters, but become cooler and more original in concept as the movie goes on– just wait until they mechanically combine into “Minutes,” and later, something even larger.

The rest of the ensemble cast are all game for whatever twists and turns the story throws at them, and that happens to amount to quite a bit. The main plot centers around Alice, having returned to Wonderland, attempting to help save the Mad Hatter’s family from the disaster that tore his family apart in his youth. In order to accomplish this goal, Alice must steal a device called the “Chronosphere” from Time, and travel back into Wonderland’s past, discovering buried secrets about several of her friends along the way. It’s a somewhat convoluted yarn for what is ostensibly a lighthearted kids’ movie, but the lunacy befits the source material: not one part of this story quite makes sense when you think about it, and Lewis Carroll would probably love that about it.

Bobin does a serviceable job of interweaving fast-paced action with character beats, and he has a knack for delivering memorable tableaus, utilizing the dense imagery and existing mythology of Wonderland to satisfactory effect. Unfortunately the dialogue often doesn’t live up to the rest of the efforts: at least one too many of the scenes are built around extended series of groan-worthy puns.

Johnny Depp is back as the Hatter, of course, but this time around he’s a little more sad than Mad, at least at the beginning. Fortunately during her time-hopping Alice gets to meet him in his spry younger days, and by the third act we are blessed with the spiritual return of the goofy, loyal sidekick-type for which Depp has become so widely renown. For the bulk of its running time, “Alice Through the Looking Glass” is a bright, cheery affair that moves along at breakneck speed, despite dealing briefly with some mature themes like death and accepting the possibility of letting go of one’s loved ones. Then the climax of the movie is actually rather dark, and there is at least one action set piece near the end that features visual elements I would call haunting.

Overall, I can say this movie isn’t perfect, but it’s also never boring. It has costumes and production design that are often dazzling, and the cast delivers on the tone that is promised– especially Mia Wasikowska, whose Alice is a confident, determined lead that refuses to let the word “impossible” get in the way of adventure. And against increasingly overwhelming odds, she never once backs down from an opportunity to help her friends. “Alice Through the Looking Glass” opens nationwide next Friday, May 27th. Comments Off on REVIEW: “Alice Through the Looking Glass” embraces the lunacy of Wonderland and gives us a peek at the history of its characters