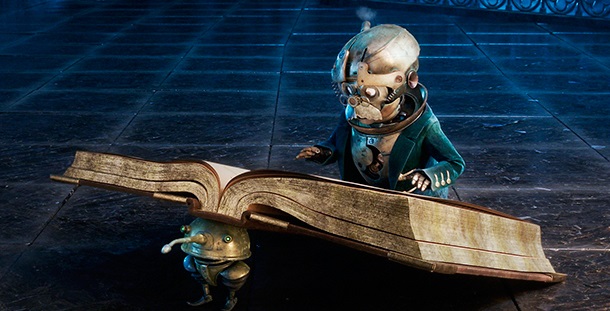 The new villain in Disney’s “Alice Through the Looking Glass,” the “Alice in Wonderland” sequel directed by James Bobin (“The Muppets”), is the devious Time, portrayed by comedy icon Sacha Baron Cohen (“Da Ali G Show,” “Borat”). And Time’s lackeys in this movie are a rag-tag bunch of clockwork servants known, appropriately, as “Seconds.”

Entertainment Weekly gave us an exclusive first peek at the mechanical helpers via stills from the film itself: At first glance, the look and function of the Seconds themselves might strike some as though Disney is attempting to capture some of the staggering popularity of Universal’s “Minions” franchise, but it should be noted that the sixty total Seconds also possess the uncanny ability to physically combine themselves into a monster known as (you guessed it) “Minute.” Take a look at a nifty piece of concept art for the decidedly Steampunk-eqsue creature: Will the Seconds be unique and compelling enough as henchmen characters to prove popular on their own merits? Only Time will tell. “Alice Through the Looking Glass” hits theaters on Friday, May 27th.