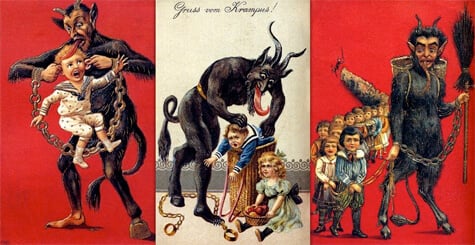 Krampus, the “Christmas Demon,” is enjoying increased recognition during the holiday season this year in part due to the 2015 dark comedy Krampus and its reemergence at Universal Studios Orlando’s Halloween Horror Nights as well as Universal Hollywood this year. The horned one was also featured in the 2010 cult classic Finnish film Rare Exports and Krampus toys, masks, sweaters, tree ornaments, and even parody books (see our story on Krampus in the Korner) are becoming more mainstream every year. Novelty toy company Archie McPhee even sells Krampus candy canes, wrapping paper and gift bags. There’s even a Krampus musical!

However, this “half-goat, half-demon” horned creature can trace its Pagan origins back some 500 years.

Masked devils acting boisterously and making nuisances of themselves are known in Germany since at least the sixteenth century while animal masked devils combining dreadful-comic (schauriglustig) antics appeared in Medieval church plays. A large literature, much of it by European folklorists, bears on these subjects. … Austrians in the community we studied are quite aware of “heathen” elements being blended with Christian elements in the Saint Nicholas customs and in other traditional winter ceremonies. They believe Krampus derives from a pagan supernatural who was assimilated to the Christian devil. – Wikipedia.

Often spotted holding chains or bells (or both) and carrying a birch switch (or even a real whip), Krampus has been depicted with either a basket on his back or a bag in hand – with the purpose of carting naughty children off to hell after whipping them. This horrific demon-like nightmare was the counterpart of Saint Nicholas during Krampusnacht (occurring on either December 5th or 6th) as the Father Christmas-like saint would only give his attention to good little boys and girls and it was the task of Krampus to attend to the naughty ones, “gifting” them with coal.

Krampusnacht has been steadily gaining in popularity during the Yule-tide (aka Christmas) holiday season.  With huge festivals in Bavaria and across Europe and more recently here in the United States.  ITM has gathered a ghoulish listing of various Krampus events taking place this year around the country. Children beware — the Krampus may just be in your town the week after Thanksgiving. . .

Los Angeles, CA hosts several events from a Krampus talk and walk, Krampus Ball, Krampus Run, a mask workshop and even a Krampus Play (in Pasadena).  All of these Yule-tide festivities are wrapped up nicely for your perusing on their Krampus Los Angeles website. Richmond, Virginia’s Krampusnacht includes an art show, live music, a costume contest and a “Holidaze Market”.  Festivities are being held on Saturday December 3rd, the weekend before Krampusnacht.

Charlotte, NC’s NODA Krampus Krawl creeps in on the 10th of December with Saint Nicholas and Krampus seeking out naughty children. This holiday pub crawl commences at 5:30pm and has three stops with live entertainment.

Bloomington, IN honors Krampus on Madison Street with a Bazaar, Parade, and Rampage on December 3rd. Visit their Facebook event page for additional information. UPDATE: Spooky Empire’s December make-up date (for the convention that was interrupted by Hurricane Matthew) kicks off with a Merry Misfits & Monster March on Friday December 2nd.  ITM has learned that just may be a Krampus or two in the march.  The event kicks off at BB King’s Blues Bar in Orlando, FL – visit the event site for more information. Gruss Von Krampus!  Will you be keeping Krampusnacht this year?  Do you have a favorite Krampus movie?  Add it to our naughty list (comment section) below.