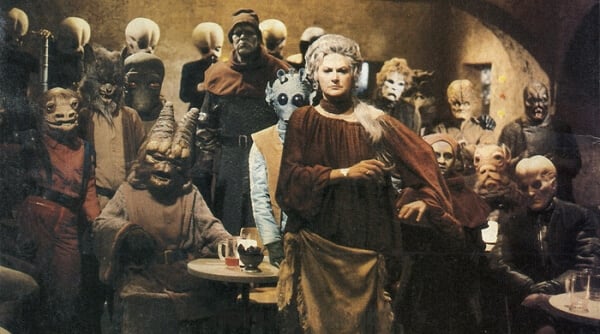 It was just over a year since Star Wars blasted onto the scene changing movies, merchandise and many lives in the process. Highly anticipated by fans (well, at least this 12 year old boy), CBS aired the Star Wars Holiday Special at 8 PM on November 17, 1978.  The 98 minute comedy/variety/drama featured not only the original cast of the 1977 blockbuster but also the first glimpse of the infamous bounty hunter Boba Fett (that short cartoon was probably the best and only really redeeming part of the television gala). The TV special also featured appearances from Bea Arthur, Art Carney and Harvey Korman as well as Jefferson Starship (all of which many fans are still scratching their heads over). With Thanksgiving themes of family gathering, Life Day is upon the Galaxy. Chewbacca and Han are on their way to Kashyyyk, Chewie’s home planet, where his wife-Malla, son-Lumpy and father-Itchy, await their arrival. Imperial forces arrive ahead of Han and Chewbacca, in an attempt to find and capture the smugglers. Eventually, after several distractions (in the form of Bea Arthur’s Cantina ballad, Harvey Korman’s cooking lessons, an acrobatic performance and a song by Jefferson Starship (and the amazing Bobba Fett cartoon), Chewie is reunited with his family and the Life Day celebration commences, in which we are treated(?) to Princess Lea’s speech and song about the holiday. The special was so poorly received (and hated by George Lucas) that it was only ever aired once. Despite the hokey additions and musical numbers, it was still a delight to see the cast appear together on a television special.

For those strong with the Force and curiosity, the Star Wars Holiday Special is well preserved and available for brave viewers on YouTube: