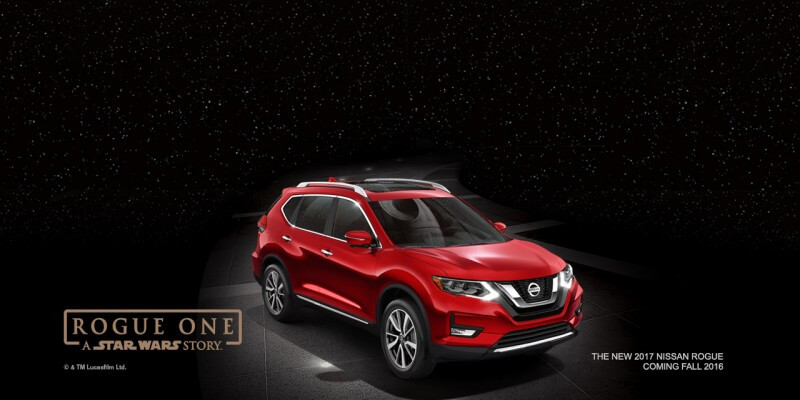 Nissan wants you to know that their new 2017 Nissan Rouge has the latest in safety features and technology, so what better way to do it than to simulate a battle seemingly straight out of the upcoming “Rogue One: A Star Wars Story” film to see what the new ride is made out of?

In this new TV spot, we come across a fictional Nissan testing facility in which a battle between Rebel forces and the Empire rages on in a desert, complete with AT-ACT walkers and even a cameo appearance by K-2SO, the former Imperial droid who now assists the good guys.

The new 30-second spot will officially begin airing nationally on Halloween and a full 60-second version will be shown in theaters.

“Showcasing Nissan’s advanced driver assistance systems in a simulated Star Wars environment, raises awareness for the robust technology offering on the newly refreshed Nissan Rogue in a very different way,” added Tucker. “The message pairs Nissan’s brand-DNA of driving excitement with relevant product information about how our vehicles are engineered to help our customers safely take on whatever out-of-this-world obstacles that they may encounter.”

Additionally, a key detail was also released regarding the coveted 2017 Rogue: Rogue One Star Wars Limited Edition vehicle that was previously announced. Nissan will be offering a numbered, full-sized-replica Death Trooper limited-edition collectible helmet with the purchase of the vehicle. (Like you needed another excuse to buy the car.)

Fans also won’t want to miss out on Nissan’s Ultimate Access Sweepstakes, which will be offering fans a chance to attend the “Rogue One: A Star Wars Story” movie opening at El Capitan Theater in Hollywood later this year. From Oct. 31 through Nov. 27, fans may register for a chance to win at NissanUSA.com/StarWarsRogueOne.

Comments Off on VIDEO: Nissan Rogue put to the test during an epic “Rogue One” battle in new TV spot