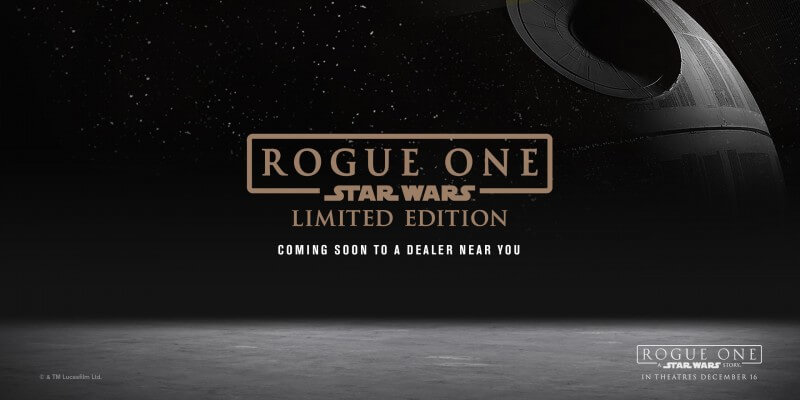 Coming right on the heels of the official launch of Rogue One: A Star Wars Story merchandise hitting shelves today comes the ultimate proof of your undying love for the powerhouse galactic franchise.

Yes, folks it’s a brand new car! Nissan has announced the Nissan Rogue: Rogue One Star Wars Limited Edition for the updated 2017 edition of their top-selling model. A special vehicle badge, designed in conjunction with Lucasfilm, was previewed today. The actual Rogue One edition of the popular compact SUV will be set for global reveal at the Los Angeles Auto Show in November.

“The Star Wars film franchise has pushed the boundaries of technology since the debut of the original episode nearly 40 years ago,” said Jeremy Tucker, vice president, Marketing Communications and Media, Nissan North America, Inc. “Nissan is doing the same with our industry-leading cars, trucks and SUVs – so it’s natural that we join forces.”

Who knows, we might just see die-hard fans lining up before midnight at Nissan dealerships as they do for the films to snatch them up. We’re also waiting for details on whether or not it has hyperdrive.

For more info and to be among the first to know further details and updates, you can visit Nissan’s official site to sign up. Rogue One: A Star Wars Story opens on December 16.