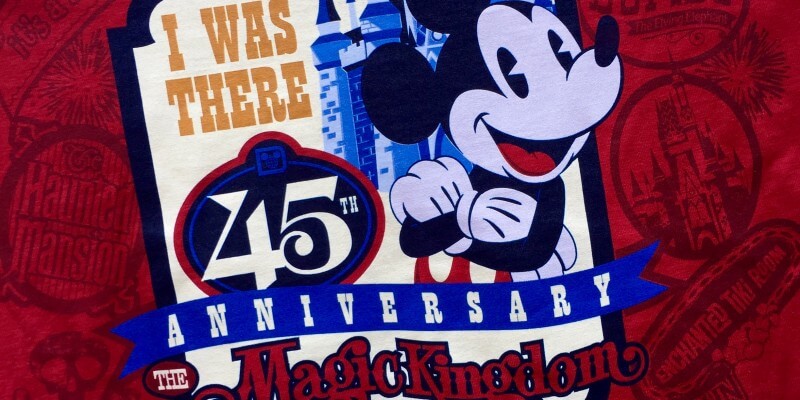 It was a long day. The crowds were packed against the turnstiles by 7:30am in anticipation for the Magic Kingdom’s 45th anniversary. As I stood there like a sardine, there were a few things that I knew were in store that made me cringe: the crowds, the heat and the tempers that rise from crowds and heat. However, when it was all said and done, the truth is that the celebration was a great success with a number of things that we loved about it. In fact, here are our top ten that we picked out for you. THE “I WAS THERE” MERCHANDISE

Along with a whole line of 45th Anniversary merchandise, Disney released a trading pin yesterday. The pin design featured a vintage-looking Mickey Mouse. He confidently hung above an anniversary banner and a bold print at the bottom that stated the anniversary date. Released as a limited edition pin, only 3,000 of the items were produced (and each guest was allowed to purchase no more than two). While all of these things were good, the point of pride lay near the bottom of the pin. It was the phrase, “I WAS THERE!” Obviously there were going to be t-shirts, but it is never a given that a commemorative t-shirt will be attractive. Luckily, the ones released for this celebration were every bit tasteful. There were a number of fashions that caught the eye; however, the ones that we have to tip our hat to are the ones specifically for guests and Passholders that attended the event. Once again, featuring variations of the event logo and conservative colors, the shirts make a statement without giving a headache. But it was still the “I WAS THERE” printed in all caps that wins it because…bragging rights.

For those of you that were able to lay your hands on any of these items, wear them like a badge of honor. It serves as proof of your stamina for surviving the insane merchandise line that stretched from The Firehouse all the way down to Casey’s Corner on Main Street USA within minutes of rope drop. It’s hard to resist the smell of sugar, and not many at the 45th Anniversary celebration even attempted. For it’s birthday, the Magic Kingdom created its own birthday cupcakes. To say they were popular would be an incredible understatement. Whether it was the primary colors that caught people’s attention or the oreo cookies that served as ears, we do not know. What we do know is that when we sought out Gaston’s Tavern at about 9:45am for a place to cool off, there was a line backed up to Be Our Guest Restaurant full of people that had to get their hands on that cupcake. We can’t say that we blame them. This item was not something rolled out specifically on October 1st for the celebration. It was available prior, but it still made our list. It is THAT cute. You may remember the BB-8 lanyards that became available around the time of The Force Awakens premiere. It featured a medallion at the end that lit up in animated patterns. This lanyard is of the same “family,” but even cuter–if you can believe that.

Hanging on the end of a strap of rich navy and red hues is a medallion that lights up as well. Front and center is the castle, and it’s flanked on either side by Space Mountain and Thunder Mountain. However, the part that really sells it–literally–are the red, yellow and blue fireworks that burst in succession. Well done, Magic Kingdom! Well done. Can you celebrate the anniversary of the Magic Kingdom without enjoying its attractions? We think not, and that is exactly why we attempted to ride every single remaining opening day attraction in the park. It’s quite a feat to say that you have survived refurbishments and “reimagine-ments” for 45 years. Not very many attractions in the Magic Kingdom can actually make the claim, but we wanted to pay homage to the ones that still could. To see how we fared in our mission, follow ITMNews on Snapchat where we documented our doings of the day. The MagicBand craze is no secret. Many of us have spent more than we ever imagined on these rubbery strips of wristwear. But just when we thought we were done dishing dollars out on MagicBands, Disney gave us one more reason to turn a deaf ear to our weeping wallets–the limited edition 45th Anniversary MagicBand. Sporting an attractive blue base and decorated with stylistic images of the castle, Mickey Mouse, fireworks and a 45th Celebration appointment, it’s fair to say this MagicBand really does distinguish itself among others. The fact that only 4,500 have been produced also makes it an “item in demand.” Disney did its best to spread its supply by limiting each guest’s purchase to two of these bands. However, from the looks of the merchandise line, we won’t be surprised if we hear that those supplies didn’t last long. After all, it didn’t make our list of favorite things for no reason. Talk about a nice touch…Casey’s Corner, the famous hot dog joint, weighed in with a sizable birthday contribution. Casey’s put out a “45th Anniversary Celebration Dog.” If you weren’t already celebrating, you were when you laid eyes on this. It was no average concession stand hot dog. It came topped with hash browns, shredded cheddar, bacon, fried onion straws and a chipotle ranch drizzle. Fries or apple slices were served on the side. It was basically a heart attack in a cardboard container for only $12.29. And judging from the crowds that packed the place all day long, this one hit a home run. Special days are about making memories, and photos are one of the best ways to make sure that the memories don’t fade. For this reason, we applaud the Magic Kingdom who gave us something for our pictures to mark the occasion–a 45th Anniversary “plaque” if you will. With an understated sophistication, this plaque was a pleasant compliment to the castle backdrop of the photos. It also served as a piece to hide the bulging bellies of those that just ate the Celebration Dog, and for that we are even more grateful. October 1st, 1971 wasn’t just opening day for The Magic Kingdom. It was opening day for three resorts as well: The Contemporary, The Polynesian Village and Fort Wilderness. Consequently, guests staying at any of these resorts were given a gift of their own–a complimentary commemorative button. Just as most of the merchandise, the button boasted the same rich hues and 45th anniversary appointment. However, this little piece of magic set each of the resort names against shadows of their individual, iconic designs. We loved the fact that the resorts were not lost in this party, so we had to acknowledge the button bonus with a place on our list. We’ve listed a great many things here that we felt were worthy of a few of our pennies. Nevertheless, our very favorite thing during the 45th Anniversary Celebration was the park map. That is the right. The free and simple park map that was given to every guest that passed through the turnstiles to enjoy their day at The Magic Kingdom. The cover displayed the same color palette as all of the merchandise we mentioned prior, and the coordinating efforts were appreciated. The element that gave us reason to pause, though, was that the map opened up into a commemorative poster that could be framed and saved as a souvenir for years to come. We were tickled with Disney’s endeavor to send everyone home with a takeaway. It meant that they cared enough about those of us that couldn’t afford the coveted items in The Emporium as well as those of us that couldn’t afford the time in line. They still wanted us to go home with something that we could cherish if we chose, and we did. We cherished it most. Most milestones deserve a degree of ceremony, and the Magic Kingdom made sure to check this box. Kicked off by the Walt Disney World Ambassadors, the short and sweet commemoration was ultimately ushered in by the president of Walt Disney World, George Kalogridis. It was a pleasant little observance with explosive streamers, a defective banner and talented singers. Above all, though, was the collection of characters that took to the stage to applaud the park. It’s hard not to squeal when nearly every princess, prince, Fab 5 icon, Pixar heavy weight and the odd but classic park personality are gathered on the same stage. In fact, this grouping was met with wild screams and enthusiastic waves. Even senior citizens in wheelchairs rose up out of their seats for the occasion. We kid you not.