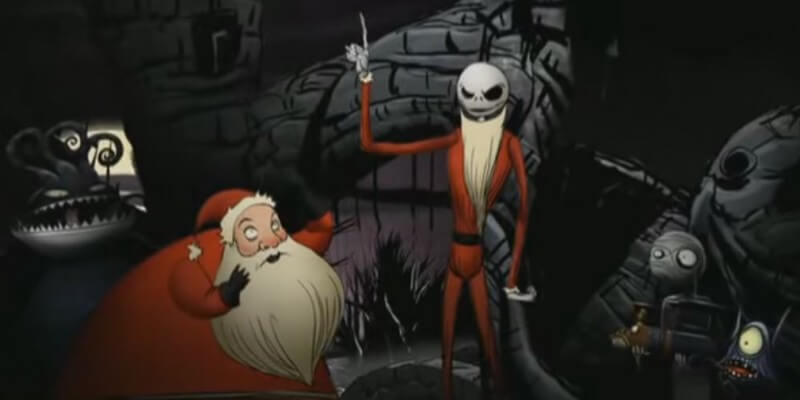 This past weekend saw the 23th anniversary of the release of the stop-motion animated classic The Nightmare before Christmas.  Originally conceived as a 30-minute TV special based on a poem written by Tim Burton in 1982, this Halloween/Christmas crossover classic has thrilled and delighted audiences since its theatrical release on October 15, 1993 (in limited release; the film saw a wide release two weeks later on October 29). The Pumpkin King, Jack Skellington, is tired of Halloween; as he wanders through the forest just outside the cemetery, he comes upon the doorway to Christmas Town. Jack decides that he must be Santa this year and decides to take over the holiday.  Kidnapping Santa and putting Halloween Town to work on holiday toys (with a darker side), Jack is ready to rule the new holiday. However, all does not go as planned and chaos ensues, leaving Santa to save the day. Burton’s original poem did not include Sally, Oogie Boogie or Dr. Finklestein as major characters. The Nightmare Before Christmas was not considered to be appropriate for a Walt Disney Pictures banner as the company saw the film as too scary and dark for the studio’s targeted younger audiences. Instead the company’s Touchstone Pictures managed the movie’s release and distribution. It was not until “Nightmare” was converted to 3D (2006) that the tale of Jack Skellington was brought under the Walt Disney Pictures umbrella. Disney has since embraced the Pumpkin King and Halloween town, with merchandise, alternative soundtracks, and even allowing Jack and his crew to take over the Haunted Mansion in Disneyland for the holiday season.