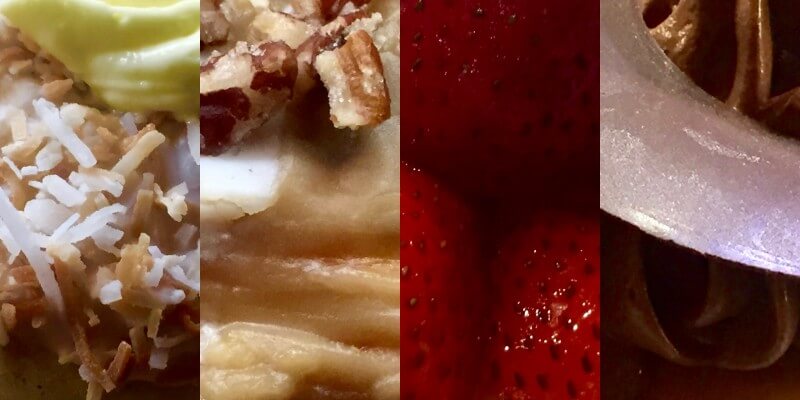 It’s embarrassing to admit, but we are a culture that has become really focused on photographing our food. With the boon of social media has come a strange but fascinating trend in society to snap pictures of our edibles so that we can share them with our family and friends that follow us online. Does the food actually taste good? It doesn’t make a difference! It’s all about angles, color composition and staging if you want those likes on Facebook, Twitter and Instagram. The problem is that not all snacks are created equal in the world of “pretty food.”

To help out any would-be food photographers heading to Epcot, we’ve compiled a list for you. These are the snacks that posed the prettiest for us in our hunt for the World Showcase‘s most photogenic foods. The Morocco Pavilion doesn’t fare as well as others when it comes to attractive snacks; however, there were a couple exotic beauties that made the cut in our picture pageant. This strawberry tart could not be upstaged by anything else in the bakery case of Tangierine Cafe. It’s a moist pastry that loves the camera with segmented fruit encircling a single, towering berry, positioned to fit perfectly in the mouth like a baby’s pacifier. We see you drooling on the other side of this computer screen, and that’s why this snack wins at life and sells at “market price.” Next to the bold strawberry tart, we were unsure if this understated beauty (that also sells at “market price”) could hold up under the lens. Surprisingly it did. Perhaps it was the subtle spiral created by the spongey cake and tangerine filling. Maybe it was the sliced almonds that complimented a monochromatic scheme. We don’t exactly know, but we do know that even in its fairly plain nature, it performed under pressure. It’s the only “beverage” that made our list, but there is a reason it can’t be ignored. The main ingredient is shaved ice: however, it is the fruit-flavored syrups and “sweet milk” poured on top that bring it front and center. It’s a rainbow in a cup, and your comments section will be filled with  “oohs and ahhs” for $4 with the sweet milk topping costing a dollar extra. The snacks of the Germany Pavilion are a bit aggressive. Their aroma reaches all the way out to the main promenade and pulls you in by the nostrils. Once you are in, though, get your cameras ready because there are many snacks in the store that will impress. The first one we selected was picked for its brazen nature. Not sure what we mean? We’ll put it this way: If Kim Kardashian were a snack, we tend to think she’d be this one because it is loaded and makes no attempt at modesty. Well endowed with chocolate, caramel and pecans, this apple has no reason to pretend it’s anything other than high-maintenance. It is a real exhibitionist that doesn’t come cheap at $13.99. The second pick from Karamell-Küche in the Germany Pavilion caught our eye because of its distinct appearance. Chocolate and caramel are quite common among the shelves of the store, but the pineapple that emerged from the coating gave this snack a unique appeal. The contrasting patterns of caramel stripes and pineapple pits work well with the chocolate layer, and as you can see, it’s picture perfect for $4.49. This particular snack is somewhat famous for its deliciousness, but what is rarely discussed is it’s wholesome beauty. Much like a girl who uses lip gloss as opposed to firetruck-red lipstick, there isn’t a lot of color to make you stop and take notice. It doesn’t need it. You stop and take notice anyway. This sweet roll still catches the eye. The toasted coconut and a dollop of pale yellow icing is just enough to compliment the vanilla custard-filled bread. For $3.49 it will delight your picture portfolio as well as your tummy. We’ve never known a cinnamon bun we didn’t like, but this one is especially attractive with its glaze and candied walnuts. If you are particularly lucky, it may even ooze a cinnamon goo for your photo if you cut it in half and expose its innards. It may cost $4.49, but you can expect a big payoff when you post a picture of this dream snack. Berries are particularly skilled at working the camera. Their color, their shape and their succulent nature will usually translate well when photographed. Stick them in a whipped cream that is sandwiched between a traditional cream puff dusted with powdered sugar, and you have the makings of something special. Sometimes this snack is put together with precision. Sometimes it appears a little messy. At $5.19, it doesn’t seem to make a difference though. It always looks good even if every puff isn’t in place. Let’s just face the facts. There really isn’t a single snack in the France Pavilion that isn’t photogenic. They are all model masterpieces. This one, though, seemed to stand out. We admit that might be due to its relation to the cocoa bean, but there was something also visually intriguing about the combination of grooves in the chocolate mousse as it was pressed between caramel cream and the smooth surface of a circular chocolate plane. This work of “abstract” food art sells for $4.50. Yes, it is a fruit parfait…fairly simple in nature. We have to admit, though, that sometimes there is real beauty in simplicity. What struck us about this snack was the pop in color from the various berries that contrasted against the blank canvas of yogurt mousse. Put a layer of raspberry sauce inside to peak out through the transparent plastic container, and you have an Instagram sensation. In fact, you’ll be so happy as you watch the number of likes go up that you probably won’t mind the $4.75 you just paid for something consumed in five bites.

Comment below and let us know if there are any snacks we missed that have gotten rave reviews on your social media accounts.