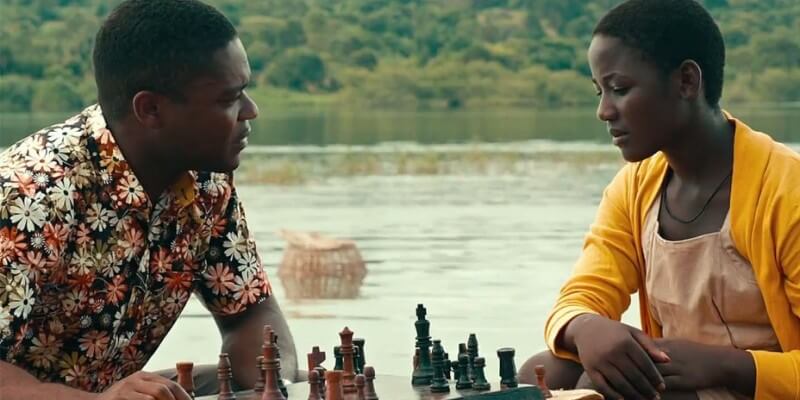 Chess is a difficult thing to portray on screen in an exciting way. It’s a game of strategy that exists largely within the players’ heads, and interpreting the layout of the board at any given time requires a type of abstract thought that isn’t easily aided by cinematic storytelling. I believe it’s largely for that reason that there have only been a handful of famous movies about chess (“Searching for Bobby Fischer” and the recent “Pawn Sacrifice” spring to mind,) while more kinetic sports like hockey and football have each racked up dozens of memorable films over the decades.

This week Disney is releasing its new biopic “Queen of Katwe,” about African chess prodigy Phiona Mutesi (capably played by newcomer Madina Nalwanga,) who uses her newly-discovered proficiency at the ancient board game to escape her dismal and onerous life in the slums of Uganda. It’s a true story that comes pre-packaged with inspiration, and the movie succeeds at conveying the inherent joy and triumph that such an uplifting real-life accomplishment carries with it, so it’s hard to find any real fault with the end product other than the fact that it hews a little too closely to exactly what you’d expect from that particular story.

Phiona lives with her mother (the always-captivating Lupita Nyong’o of “12 Years a Slave” and two recent motion-capture performances in Disney’s “The Jungle Book” and “Star Wars: The Force Awakens”) and siblings in a tiny lean-to in the Ugandan ghetto of Katwe, where they barely manage to survive by selling corn in the local marketplace. By chance, she and her brother stumble into a mentorship under altruistic neighborhood missionary Robert Katende (played by the equally-talented David Oyelowo of “Selma” and “The Help”) who takes it upon himself to teach them and a small group of other children the nuances of chess, in an effort to keep them off the streets.

Through a series of training montages and tournament scenes, we discover that Phiona has an aptitude for the game that exceeds anyone who has ever played competitively in Katwe before, including Katende himself. It’s unfortunate, though, that the movie relies on expository dialogue and swelling musical cues to let the audience know when Phiona is succeeding, rather than attempt to get across the basics of the game itself. Director Mira Nair (“Monsoon Wedding,” “The Namesake”) has made the assumption that either we already have a passing familiarity with chess or that it would eat up too much screen time to explain it satisfactorily. In the end, we have to take the movie’s word for it whether a specific move is good or bad. It’s a shorthand that bypasses the tedious details, but it often left me feeling out of the loop in a way that I wouldn’t in a movie about, say, baseball.

That problem may be sympomatic of the larger (and really, the only) issue I had with “Queen of Katwe:” the movie plays it safe and doesn’t ask very much from its audience. It holds our hand through a story to which we can predict the ending as soon as we know the setting and players. It goes through the motions, beat for beat, and delivers a by-the-numbers biography of a young woman whose life story luckily can’t help but be compelling.

Nevertheless, the performances and otherwise confident direction held my attention throughout the film, and it would take someone several degrees more soulless than I to not feel empathy for Fiona and her family’s struggle, and ultimately, elation in her considerable achievement. In that way, “Queen of Katwe” makes all the right moves.