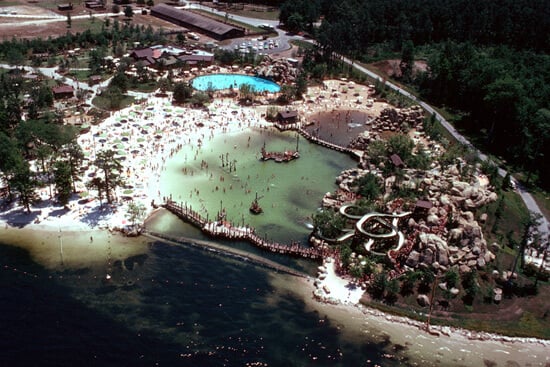 The once beloved River Country water park near Disney’s Fort Wilderness Resort has been a desolate spot overrun by weeds and algae since it closed its gates in 2002. Rather than remove the extinct attraction, Disney has chosen to leave the area untouched…until now.

Over a decade later, Disney has turned its attention to Upstream Plunge, a 330,000 gallon kidney-shaped pool. Orlando Sentinel reports that there are plans for the pool to be drained and filled-in. No specific reasons have been given by Disney as to why they are filling the pool; however, speculation is that it is due to its proximity to a popular dining event, Mickey’s Backyard BBQ. With the pool being adjacent to the area where many families dine regularly with their children, the thought is that the water hole could be a liability should someone manage to find their way into the prohibited space.

Disney has stated that the work on Upstream Plunge has been intended for some time now but that they there is no plan to tear down other areas of the park in near future. Orlando Sentinel notes that there has long been speculation that the area will eventually be redeveloped for Disney Vacation Club