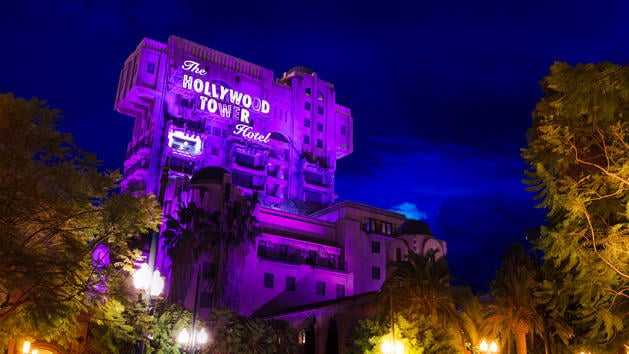 Though many fans are still reeling from the news, officially announced back in July at San Diego Comic Con, it’s time to accept the reality that The Twilight Zone Tower of Terror is going away forever at Disney California Adventure in the Disneyland Resort.

Disneyland itself has marked the occasion by announcing several special events coming to the Hollywood Tower Hotel to memorialize the final few months of the attraction’s operation in the park, starting with the kick-off of the resort’s Halloween season on Friday, September 9th.

First up is “Late Check Out,” which allows guests visiting California Adventure in the evening hours to “Experience The Twilight Zone Tower of Terror™ as [they] never have before … in complete darkness!”

In addition to that unique spin on the ride itself, visitors will also be able to purchase new commemorative merchandise, partake in an exclusive photo opportunity in front of the hotel, and enjoy special performances by fictional 1930s singing group The Silver Lake Sisters outside the attraction.

For more details, visit the Disney Parks Blog announcement page and check back here at Inside the Magic for further updates and reports from the waning days of The Twilight Zone Tower of Terror. The final day for the attraction at Disney California Adventure is Monday, January 2nd, 2017.