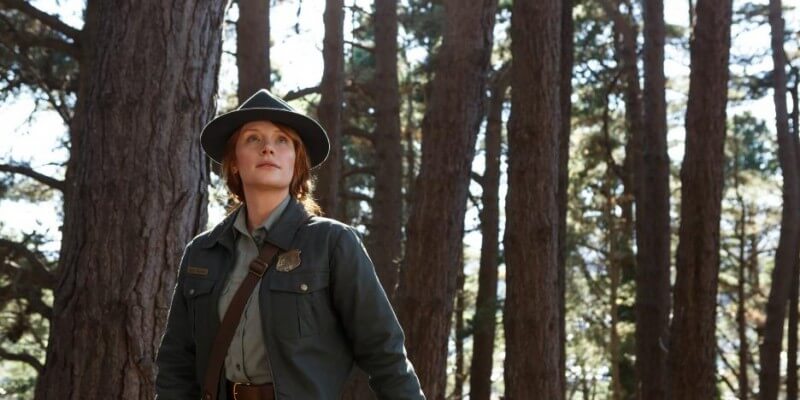 Bryce Dallas Howard first made a name for herself on movie screens over a decade ago with her debut starring role in M. Night Shyamalan’s divisive thriller “The Village,” instantly proving she had the acting chops to become so much more than just Hollywood royalty.

Now, a dozen years into her career, Howard has just as many films under her belt, and has become the go-to leading lady for big-budget action blockbusters, cementing that role with last year’s smash hit “Jurassic World.” Next week, she can be seen face-to-face with another giant lizard (not to mention the legendary Robert Redford) in Disney’s “Pete’s Dragon,” a reimagining of the 1977 animation-meets-live-action musical comedy.

I had the pleasure of sitting down with Ms. Howard, along with select members of the press, at a round-table interview last week. We discussed her work as park ranger Grace in the new “Pete’s Dragon,” her love of the original, and what it was like working with the remainder of the cast. Rest assured, she is just as delightful to interact with in person as you would imagine.

First, Howard talked about what it was like to be cast in the movie, and how her friends and family reacted to the news. “My sister cried, because we were so into [the original] ‘Pete’s Dragon.’ And then it was that kind of complicated moment where I’m like, ‘Well, but it’s not a remake. It’s a reimagining. Let me describe what a reimagining is and what it is not.'”

“But I really wonder what it’s going to be for my kids’ generation, because I think for us we love the original movie. And the original movie, I feel like it [has] a little bit of a cult following; it’s not like it was super mainstream. [But] all of us that had the ratty-tatty VHS copy, we were really into it. So I think that it will be really interesting to see the two different perceptions of it.”

Then she discussed her response to seeing the completed version of the new film. “I just saw it a couple of days ago. I had seen an older cut, but I saw the final version a couple days ago with my husband, and it was very emotional for me, seeing me in a mom role. My husband gave me this really good advice early, because I kept saying, ‘I don’t want to overcomplicate things because this is a children’s film.'”

“Whenever I was a kid and I would watch children’s films and it would get to a scene with two adults talking, I would just be like, ‘Just get to the dragon!’ Like, ‘Where’s the dragon?’ And so that was something that I was kind of aware of. I was like, ‘Who is this woman? What is she like?’ and [my husband said,] ‘It’s really simple, babe. You are with Pete the way that you are with the kids.’ Like, ‘This is her son. We don’t realize that when they first meet each other but this is her son. And she’s going to be his mother. So that’s how you should speak to him.'”

Next, Howard compared the process of making “Pete’s Dragon” with what it was like working on her previous film. “It was hilarious, because I made this pretty soon– only a few months– after I finished ‘Jurassic [World,]’ and I kept messing up. Like, when I was on set, I would just be like, ‘Okay so, where’s the raptor? Where’s the dinosaur?’ And then I’m like, ‘Ohhh.. dragon!’ And now I’m sure we’re going to be shooting the next ‘Jurassic’ and I’ll probably be referring to them as dragons.”

“But in my mind they were two very different films, obviously, and the tones are really different. I think for this one, the thing that I just kept thinking about or considering was Disney’s canon of work, the Disney legacy, and how Disney has been of service to children because of the kinds of stories that they tell. That was something that I was really cognizant of, whereas obviously with ‘Jurassic World,’ it’s the legacy of Michael Crichton, [and] of Steven Spielberg. You want to honor their legacy. You need to be aware of that because that brand represents something.”

Asked how she felt the new “Pete’s Dragon” movie pays homage to the original, Howard responded, “I think there were really no throwbacks, intentionally, other than what was at the genesis of this idea, which is that it’s about a boy who’s orphaned whose family, in essence, is a dragon. It’s his best friend. And no one believes that that dragon exists, and then we come to see that magic is actually possible.”

“It’s a story about what it takes to find your family. And I think that that, thematically, is obviously very similar to the first film, but this really was [original.] It’s not even like, ‘inspired by.’ It’s really an original film; it’s not meant to step on the memories of the 1977 version of ‘Pete’s Dragon.’ I think, for all of us, that’s going to be the tricky thing in introducing this movie to folks. How do we mention [the original film] but also [ensure] that it doesn’t become all about that, because it’s meant to be something that’s complementary, but it is [also] something that’s stand-alone.”

Howard then went on to address her work in effects-heavy cinema, and how the character of Elliot the dragon was made real on-set for the cast. “The techonology is changing so rapidly. There were even different things [developed] between shooting ‘Jurassic World’ and this, that were simply different techniques and ways to create that realism on set while also making sure that everybody got what they needed in order to build this fantastical creature in post using visual effects.”

“What we had, was– you know those jumpy castles, how it’s just plastic and then you blow them up and it [becomes] something? We had the equivalent of that for a dragon. So we had a big, fifteen-foot-tall blown-up version of Elliot, that would only take like five minutes to blow up. And so in a lot of the scenes, in particular where Oakes [Fegley, who plays Pete] was there, or Oona [Laurence, who play’s Grace’s daughter Natalie] was there, we would have the dragon there, just as a reference point, so we wouldn’t have to be constantly saying, ‘Wait, is it that leaf that we’re looking at or that one over there?’ and that was enormously helpful.”

“We shot this in New Zealand. And before we started shooting, David [Lowery, the director of ‘Pete’s Dragon’] and Jim [Whitaker] the producer arranged for us to go to Peter Jackson’s screening room and see what [effects house] Weta was doing with Elliot, so that we could know, like, that he was furry. He didn’t have scales. Stuff like that. And to get a sense of his playfulness, and that he kind of looked like a big puppy dog. That was important so that we had a sense of what he was going to be like.”

“This really weird, kind of magical thing happens where obviously [when you’re on set] you’re pretending and you’re not seeing anybody, but then I saw the film a couple days ago, and now all of a sudden, all my memories of shooting [are] exactly what I saw in the movie. Anyway, that’s like my whole job. [Playing pretend is] my entire job.”

Howard wrapped up the interview by reflecting on the rest of her fellow cast members, most notably Robert Redford. “It’s crazy, because he’s like this regular, very cool, awesome guy, that you would want to work with every single day. And it’s a relaxing experience. It’s not intimidating. But then there’s this other side, where you’re like, ‘You’re the greatest entertainment entrepreneur of all time. You created Sundance [Film Festival] and you’re an iconic actor and director and producer.’ He’s an exceptional human being, and so it’s this huge privilege to be in his presence, but then he’s also a cool dude to chill with, as well.”

And finally, she beamed about the child actors who bring a sense of joy and wonder to “Pete’s Dragon.” “They’re awesome. They’re the best. I mean, I feel like they say, ‘Don’t work with children and animals.’ Yes, maybe sometimes [with] animals it’s a little unpredictable, but every experience that I’ve had working with kids has been so calm and relaxed and focused and inspiring. And these kids in particular, they’re like not kids. Many times, I would ask Oakes and Oona for advice, like if I was trying to figure something out, I’d just be like, ‘Guys, what should I do?’ And they would always have the best suggestions. And Oakes is going to be a little filmmaker. And Oona’s going to be president, so that’s awesome.”