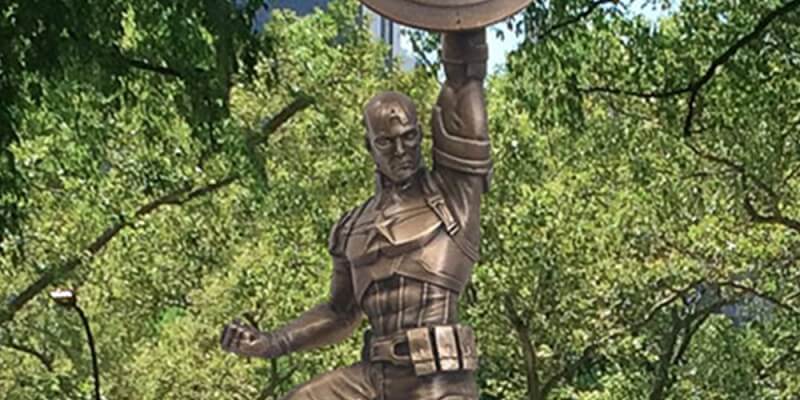 Earlier this month we reported that a Captain America statue would have a new home in Brooklyn (and why it’s important), New York. Originally revealed by USA Today, the 13-foot bronze statue will first appear at San Diego Comic-Con 2016, before making a journey across America to Prospect Park, Brooklyn on August 10th for a special dedication ceremony complete with a special screening of “Captain America: Civil War”. Even more special, it’s the 75th anniversary of the good Captain’s debut.

Now, we finally have a look at the massive statue: It’s really quite a stunning piece of art. The statue depicts Rogers with his shield held high in the air, with his classic first shield represented lovingly below the words “Hometown Pride”. iO9 reports that Comicave Studios—who designed the statue alongside Marvel—will also be selling limited edition replicas of the monument through their online store. Only 750 12-inch-tall statues will be available, cast in bronze available to order, alongside a smaller run of 35-inch-tall replicas, cast in pewter.

After Comic-Con, the statue will make its way across the country, with Marvel documenting its journey via social media, and then will be temporarily placed at Prospect Park for its dedication ceremony, reports EW. It will then move to the borough’s Barclays Center in September before heading to Sunset Park in October.

Additionally, a brand new comic featuring the statue in the story will also be released. According to EW, the comic will be exclusively available at San Diego Comic-Con and future Captain America events. For all things awesome, stick with ITM!