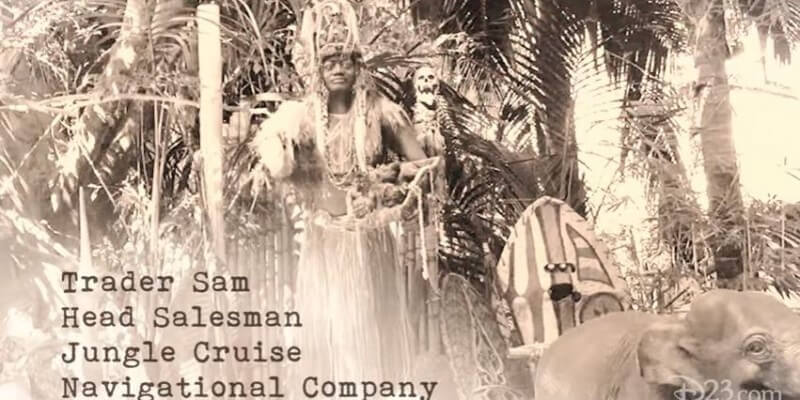 Earlier this week the voice of Nigel Greenwater of the Global Broadcasting Service (via a YouTube video from D23) brought us a celebratory excursion into Trader Sam’s Enchanted Tiki Bar in Disneyland.  In somewhat of an informal acknowledgement of five years open, Five treasures You’ll Find in Trader Sam’s Enchanted Tiki Bar highlights several of the festively fun finds at the Jungle Cruise spin off bar.

With artifacts from Pleasure Island’s Adventurers Club and references to Pixar’s UP, adventure calls up these five treasures (in no particular order, as our narrator Nigel reminds): Trader Sam seems to have cornered the enchanting enterprise on both coasts.  His Enchanted Tiki Bar at the Disneyland Hotel (Anaheim CA) opened in May of 2011 and Trader Sam’s Grog Grotto at the Polynesian Village Resort in Walt Disney World (Orlando FL) opened in April of 2015.  Both venues feature heavily themed Jungle Cruise/Adventure décor and drink menus. If you’ve dared to seek adventure at either of Trader Sam’s locations, we’d love to hear about it.  What was your favorite beverage?  Tell us in the comments below