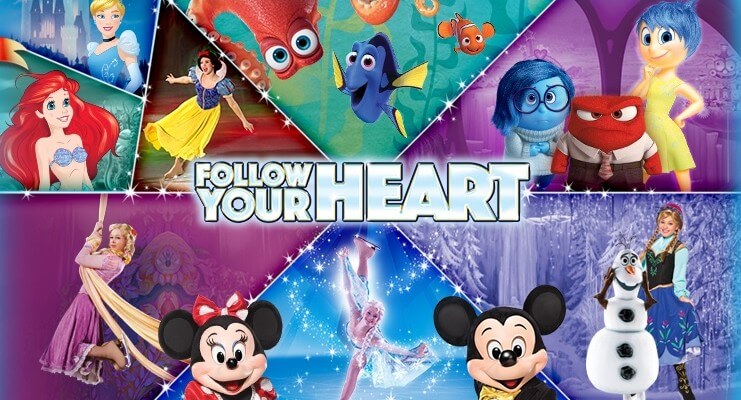 I’m a frequent visitor to the Disney on Ice shows as I think they are one of the best entertainment values out there, even living here in Orlando next to the parks.

Exciting news have just arrived from Feld Entertainment as they have announced that the Disney on Ice show “Follow Your Heart” will feature the animated cast of this summer’s hit Finding Dory and the characters from Inside Out. The Pixar characters will be joining the show this September but tickets are already on sale now for a number of markets across the United States.

Check out the show description below and get your tickets now! Follow Your Heart allows families to join in on the deep-sea adventure as Dory comes off the screen and onto the ice. With help from Nemo, Marlin and new pal Hank, Dory embarks on a life-changing excursion. The engaging atmosphere of Disney On Ice allows Dory’s humor to take center stage deepening the audience’s existing connection to their favorite forgetful fish. The production will dive into the extraordinary underwater world from Finding Dory, as a vibrant rainbow of digital projection will transform the ice floor into a colorful aquatic paradise.

“What makes this Disney On Ice production so special is the variety of stories about self-discovery, courage and compassion,” said Executive Vice President of Feld Entertainment and Producer of Disney On Ice presents Follow Your Heart Nicole Feld. “Each element of this show was carefully planned so our fans could experience favorite Disney moments while believing in their own destiny.”

Pixar’s Inside Out makes its Disney On Ice debut as Riley’s Emotions –Joy, Sadness, Anger, Fear and Disgust– reel the audience into the action to help her find the confidence to win the hockey championship and to experience the emotional rollercoaster of growing up alongside Riley. Families are provided the opportunity to easily discuss the feelings children face every day through this live interpretation of Inside Out.

Get your tickets HERE!