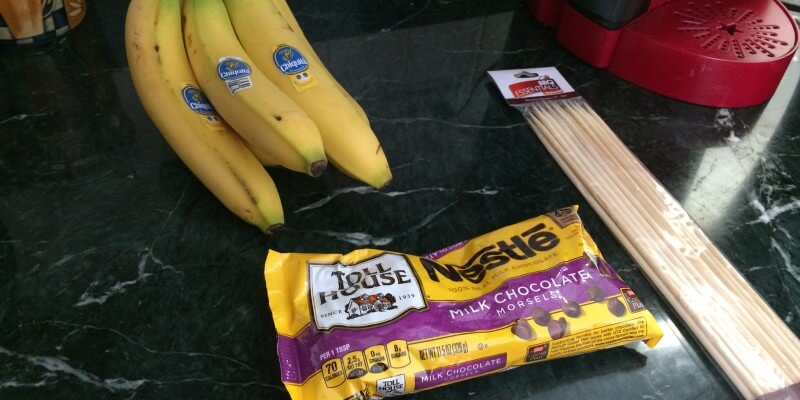 Hey everyone! I’m back at it again trying to recreate some Disney magic in my own home since I can’t afford an annual trip to the Happiest Place On Earth. Last time, I tried recreating some Dole Whip and had moderate success. This time, I’m aiming at another treat offered at various Disney Parks and a certain family-owned frozen banana stand in Marina Del Ray, CA: a frozen chocolate banana!

The first time I ever saw this was at Disneyland in July of 1997. My family took a trip to Anaheim, CA and stopped by the original Disney park! Seemed like everyone had a Mickey Mouse ice cream bar, or this frozen banana. Being from the East Coast, I had never even heard of this dessert before.

“Why would someone freeze a banana and then cover it in chocolate? Bananas are good enough,” I thought, but not really. So after being weirded out by it, I thought I should M-I-C what all the fuss as about. K-E-Y? Cause when in Rome, do what the Romans do.

WOW. I am sorry for that last pun. I’m garbage.

Anyway, I took a bite and I immediately knew what the big deal was.

So, here is a recipe I found for a great frozen treat during these hot summer days from the people who know everything there is to know about bananas: Chiquita!

I deviated a little bit from the recipe, cause they want you to cut the bananas in half and use popsicle sticks, but I used the whole banana and barbecue skewers.
So, I peeled the bananas and shoved skewers in them and kept them frozen for an hour…

After an hour, I melted the chocolate morsels in the microwave for about 90 seconds…

Then I spread the chocolate around the bananas…

Then kept them in the freezer for four hours. Would the frozen dessert come out as good as the ones served at the Bluth Banana Stand? Would my version live up the ones sold at the Disney Parks? I’d know in a few hours.

Hmmmm. Boy. They did not come out looking as great as I hoped.

Maybe you’re better off leaving this dessert to the professionals.