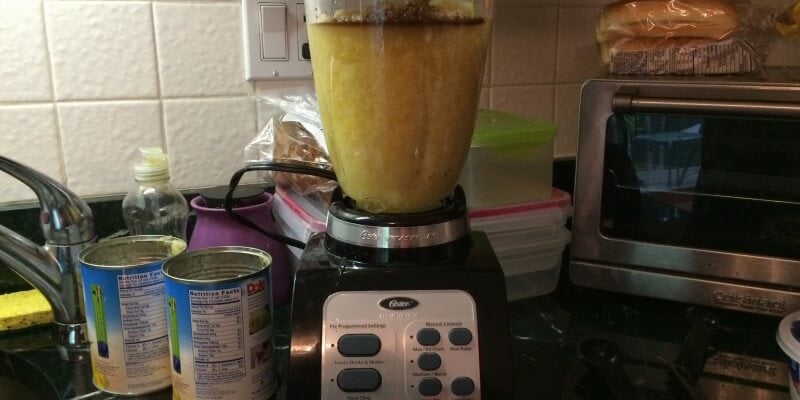 We’d all like to relive a little bit of that Disney magic we remember from our trips to the various parks. But since a lot of us can’t afford to take a trip to Anaheim, CA or Buena Vista, FL every year, we’ve gotta make do with what we’ve got.

You might go through old photos, visit nifty sites like this one, stand in 90 percent humidity on a sunny day or have someone shake your chair while you’re watching a YouTube video of your favorite ride (not that I’ve ever done that). Me on the other hand, I decided to put my culinary skills to the test and make some home made Dole Whip using a recipe I found online at the Domestic Rebel.

According to Disney Wikia, park-goers can find Dole Whip at Disneyland, the Magic Kingdom and the Polynesian Resort.

So the recipe calls for:

I was little surprised the recipe called for Cool Whip. I would’ve thought it would require whipping cream or ice cream as a base. Anyway, like Dazz Band said, let it whip!

The first step is to put both cans of crushed pineapple into a blender along with the sugar, lemon and limes juices and the vanilla extract and blend on high until the mixture is smooth.

After, I needed to cut the frozen Cool Whip into quarters, then mix them into the pineapple blend.

Then, after I blended the Cool Whip into the pineapple blend, I poured the mixture into two cups and placed them into the freezer for two hours.

So after concoctions were frozen, I gave the homemade Dole Whip a taste test.

THE VERDICT: A success! While I don’t think it’ll taste as good as the Dole Whip you could find at the Disney parks, this is a taste way to somehow relive some wonderful memories at the Happiest Place On Earth.

Additionally, Inside the Magic‘s very own Ricky Brigante also posted up this alternate recipe nine years ago. Try them both out to see which one you like the best!