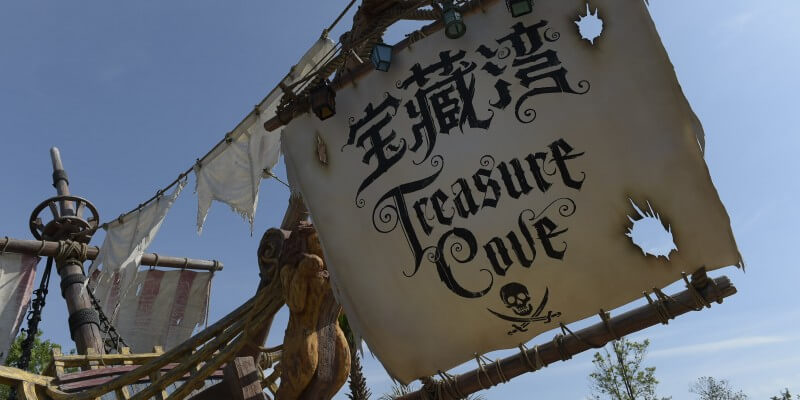 There’s no shortage of firsts at the brand new Shanghai Disney Resort, but for those brave travelers willing to venture into the high seas at Treasure Cove, they’ll be fully immersed into the first pirate-themed land at a Disney park.

Developed especially for Shanghai Disneyland, guests can enjoy new attractions and original storytelling with stunning and imaginative details spread throughout five neighborhoods at Treasure Cove: Shipwreck Shore, Fort Snobbish, Landlubber Landing and the Village, each with its own charm and personality.

Obviously the highlight of the area — and arguably of Shanghai Disneyland — is the new Pirates of the Caribbean ride, but guests can also enjoy the two massive ships located there along with pirate-themed restaurants, the “Shipwreck Shore” water play area located on the remains of a shipwrecked French galleon and a thrilling show called “Eye of the Storm: Captain Jack’s Stunt Spectacular” at El Teatro Fandango.

This stunt show is making its world premiere at Shanghai with all sorts of sword fighting and visual effects the whole family can enjoy. As for the story, Captain Jack will “fight a Royal Admiral in a whirlwind finale, which in itself is a first-of-its-kind achievement in technology and storytelling.”

Treasure Cove also has its own rich backstory as explained by the Shanghai Disney Resort:

Rich in detail and storytelling, Treasure Cove is a raucous collision of color, sights and songs, blending cultures and countries with pirate frivolity, mayhem and personality.

The story of Treasure Cove dates back to the 17th century, when piracy was a thriving enterprise in the Caribbean. In Disney lore, this Age of Piracy featured a band of seafaring rogues who chased legendary treasures, fought monsters and battled each other, always with a humorous glint in their eyes. Treasure Cove’s centerpiece is the incredible new Pirates of the Caribbean: Battle for the Sunken Treasure indoor boat ride. This isn’t your dad’s Pirates of the Caribbean however, with the story based primarily on Disney’s hit movies rather than the original 1967 ride with Captain Jack Sparrow on the hunt for valuable treasure that Davy Jones possesses. The latest technology is used throughout the ride, with three large media domes, projected effects, animatronics and theatrical sets to immerse guests above and below the sea to tell its fantastic story.

Additionally, a new ride system being used for the first time in Shanghai which allows the boats to spin, travel sideways and backwards.

Elsewhere, guests can hit up the Explorer Canoes around the waters of Treasure Cove using real canoes along with a friendly captain leading the way. In between learning about the area and its plentiful secrets, guests need to watch out for water cannons deployed by pirates/fellow guests. And of course no pirate-themed land could be complete without a meet and greet opportunity with Jack Sparrow himself!

Pirates and guests alike can fill their bellies over at Barbossa’s Bounty, one of the largest restaurants at Shanghai Disneyland. Not only can guests enjoy delicious menu items such as Asian barbecue from several themed dining rooms but they can also dine inside the Pirates of the Caribbean ride.

Treasure Cove looks to be an incredible addition to Shanghai Disneyland for guests of all ages!