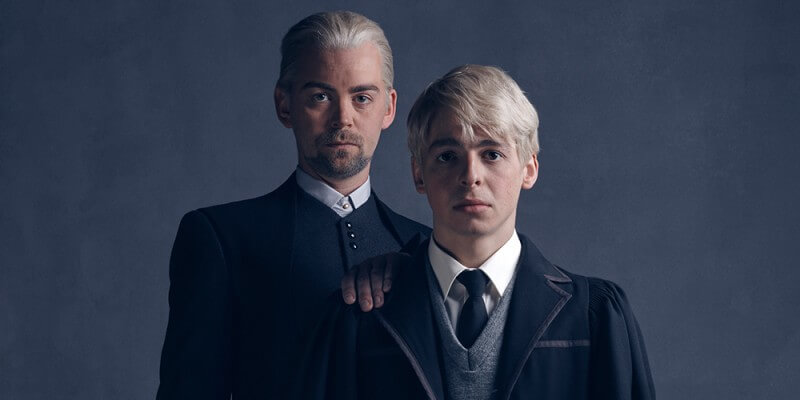 We recently presented the first look at the adult Potter family and the adult Granger-Weasley family from Harry Potter and the Cursed Child, and now it’s time to catch up with the Malfoys! Draco (played by Alex Price) and his oddly-uncomfortable-looking son Scorpius (Anthony Boyle) will apparently play a large role in the upcoming West End play. This tale will serve as the eighth Harry Potter story, and will pick up right after the epilogue of Harry Potter and the Deathly Hallows. It’s very easy to draw comparisons to the relationship between Draco and his father, Lucius, so it’s pretty clear that we’ll be getting a glimpse into a father-son conflict deep into this new story. Not pictured in this image is Draco’s wife, Astoria Greengrass. Is she only playing a minor role in the play, or is this a direct representation of her distain for being married to Draco? I guess we’ll have to find out when Scholastic publishes the script on July 31st.

Rowling had this to say regarding the looks of both Malfoys’:

“I love Draco and Scorpius – they actually look related!… I’ve got a feeling Scorpius is going to do nothing to turn girls off the Malfoy men.” Harry Potter and the Cursed Child begins preview performances on June 7 at London’s Palace Theatre. In the meantime, stick with Inside the Magic for all the best news from the Wizarding World!

Comments Off on PHOTOS: First look at Draco and Scorpius Malfoy from ‘Harry Potter and the Cursed Child’ play