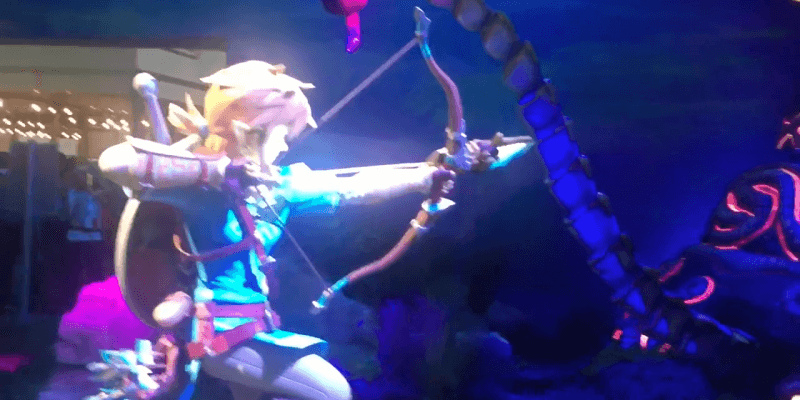 Nintendo’s newest epic, The Legend of Zelda: Breath of the Wild has a massive presence at E3 2016 this year. You can check out my full coverage of the giant demo right here, but I want to talk a little bit for a second about the journey it took to get to those screens.

After waiting a massive line, guests walked through a giant stone tome and into what looks like a mystical dungeon. We were then treated to a full, extended trailer of the new Zelda game, rife with exploration and adventure. When all of that finished, the screen in front of us turned into a beautiful stone doorway that rumbled and extended into the ceiling where a pathway revealed the entrance to one of the most immersive areas I’ve ever experienced at a convention. I was transported to the land of Hyrule.

Lush trees and a beautifully painted backdrop surrounded rows of screens where gamers had the opportunity to experience the new Zelda game in all its glory. A bubbling pot filled with food, a moblin perched high on a watch tower, and Link himself was seen battling a giant creature which sucked us immediately into the world of the game. Check out my full walkthrough video below:

So what do you guys think? Is this a taste of what’s to come at Universal Orlando’s new Nintendo expansion? Let me know in the comments below, and stick with ITM for all the coolest video game coverage!

Comments Off on E3 2016: “The Legend of Zelda: Breath of the Wild” demo area turns Hyrule into a Nintendo theme park!