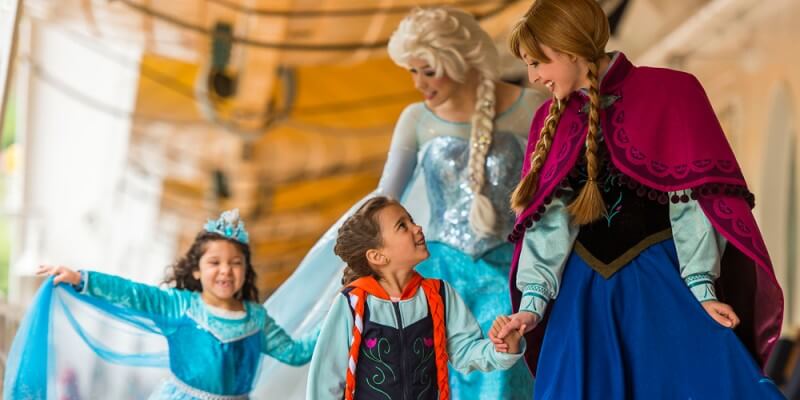 It looks like Disney’s Frozen is hitting the high seas!

It was just announced that, on select Disney Magic and Disney Wonder sailings, you’ll be transported to the land of Arendelle when the Disney Cruise Line ship is transformed into a winter wonderland — in summeeeeeeeer! Disney Parks Blog reports that in the morning, families will awake to notice that a magical freeze has overtaken the atrium lobby with crazy sparkling icicles taking over a grand staircase. You know, like the castle of a very familiar snow queen. The blog also reports that throughout the day there will be Scandinavian-inspired family activities, a themed dining experience with a menu of traditional Nordic fare and meet and greets with Anna, Elsa, Kristoff and Olaf!

The day will conclude with a nighttime spectacular celebration “Freezing the Night Away with Anna, Elsa and Friends.” By this time, the freeze has spread to the upper decks and guests will be able to party with their favorite characters under the stars. Whether you’re a fan of Frozen or not, this sounds like a blast for everybody who get to attend! Here’s the breakdown of the show:

The celebration begins with a high-energy line dance, set to the movie’s ice cutting scene, featuring the arrival of Kristoff, impressively twirling his ice picks, and Princess Anna. Kristoff and Anna’s beloved companions, Sven, the trolls and Olaf, make virtual appearances at the party. Sven engages the crowd in reindeer games like “Sven Says” and the “Troll Stroll,” and Olaf leads a sing along to his signature song, “In Summer.”

Elsa arrives with a snowy gust of wind, calling on guests to sing “Let it Go” with her as she conjures up a wintry spectacle to cool things down for Olaf. In true Disney fashion, Elsa unleashes her magic, sending a chill through everyone as the powerful Academy Award-winning song echoes from the ship. The evening concludes with more family dancing on the pool deck. Then the fun continues just for adults in the dance club featuring performances and frozen specialty drinks. What do you guys think about Frozen taking over two Disney Cruise Line ships? Are you running to get your tickets? Let me know in the comments below, and for all things Disney, stick with Inside the Magic!