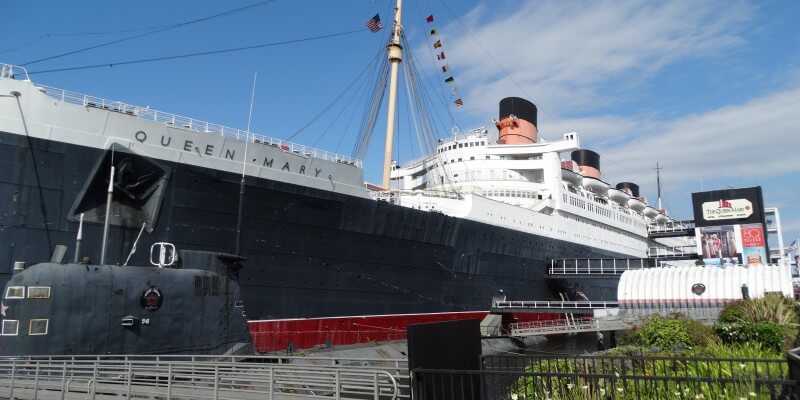 This Friday, May 27th, the legendary Scottish-built ocean liner The Queen Mary will celebrate its 80th anniversary in public service. The ship transported passengers across the North Atlantic for over three decades, between 1936 and 1967, and also serving as a troopship that ferried Allied soldiers during World War II.

Since the late 1960s, The Queen Mary has been permanently docked in Long Beach Harbor in Southern California, where it hosts historical tours of its interior. For a short period Disney even owned the ship and considered turning the area around it into a theme park called DisneySea. The location now serves as a hotel and plays home to seasonal events at Halloween and Christmas. This week, to celebrate the 80th anniversary, a select group of media was invited aboard the ship for the American premiere of the new BBC documentary “The Queen Mary: Greatest Ocean Liner.” In attendance for the screening were several interviewees from the hour-long movie (which will air this summer on the Smithsonian Channel in the United States) as well as Randolph Churchill, the great-grandson of world-renown British Prime Minister Winston Churchill, who traveled on the Queen Mary several times during the war.

The BBC documentary “The Queen Mary: Greatest Ocean Liner” is currently available to watch for viewers in the UK. The hour-long movie will be slightly edited and aired as “The Queen Mary: Mighty Ship at War” when it airs on the Smithsonian Channel this August. Be sure to visit The Queen Mary’s official website for more information on visiting the attraction in Long Beach. Admission to the ship will be free all day this Friday, May 27th, in commemoration of its 80th anniversary.