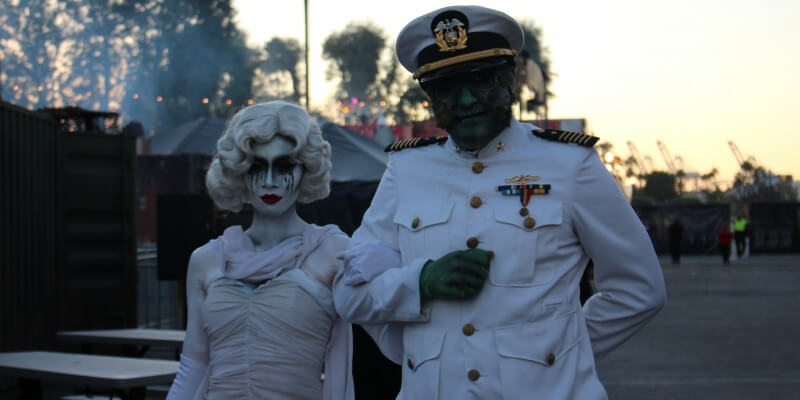 You couldn’t ask for a more perfect setting to create a haunted attraction than in a real life haunted ship. This year Queen Mary’s Dark Harbor Halloween event returns with new experiences and returning favorites featuring more details and scares than in previous years. The new entrance into the park is a very nice change. Guests enter through The Village surrounded by small shops, buildings and of course monsters. This intimate entrance does a nice job setting the mood. One of the first attractions you will see is the new “The Curse of Anubis: Paintball Adventure” (up charge). Mummies and evil darkness are being raised from the dead by the ancient Egyptian god of death. You must fight the monsters in a battle of paint and bravery before they are unleashed for good. Approximately twelve guests are let in at a time and armored with paint ball guns shooting thirty glow in the dark paintballs per guest. Think of it as a traditional shooting gallery, but with actors to shoot at in addition to props and dummies.

Just beyond that you will find the maze “Voodoo Village”. The Voodoo Priestess and her following of rabid gypsies have taken over The Village. Encounter voodoo spirits, tombstone monsters, horrifying sacrifices and murky bayous as you make your way through. This maze was full of some of my favorite actors of the night. They went above and beyond just jump scares creating a really creepy atmosphere simply staring you down and being unpredictable. I love how this maze takes advantage of zig-zagging in an out of the permanent buildings and outdoor areas of The Village. This is the same area you pass as you enter the park completely unaware of the maze inside. The maze Circus is perhaps one of the more iconic mazes considering Dark Harbor’s icon of The Ringmaster calls this one home. Face your nightmares as you fight your way through the horrors under the Ringmaster’s big top. Although this is a returning maze they did a very nice job with updates. Most notably there is a section of the maze where you must make your through a ball pit very much like you would find in a kids playground. I felt that this was a clever and surprising addition. It was playful and of course scary since it made it harder to escape the monsters and considering you didn’t know quite how deep this ball pit would become. I’ve always been impressed with the maze Deadrise considering its simplicity. Board if you dare and run for your life from Half Hatch Henry and the vengeful souls of this long lost warship previously buried beneath the waves. Most of this maze is made up of large shipping crates connected by scenic pieces, but it does a great job creating scares considering the many hiding places and dim lighting and plethora of fog inside. Then come the three mazes that are located on the actual Queen Mary ship. Soulmate, B340 and Lullaby.

Lullaby is a brand new maze this year featuring the iconic character of Scary Mary. Descend into the depths of The Queen Mary as Scary Mary, the youngest Dark Harbor spirit, gathers mortal playmates to fill her terrifying playground. Will you join her game of Hide & Seek? As you journey through the bowels of this grand ship encountering Scary Mary along the way, she leads you to the place of her death. The old abandoned swimming pool. This real abandoned swimming pool in the ship is beautiful and creepy enough but knowing the truth about what happened to Scary Mary years ago makes it such a haunting set piece for the finale of this maze. B340 and Soulmate are both returning mazes from last year, but there true life stories and characters make them the perfect settings for this haunted attraction. In B340 journey through the terrifying mind of Samuel the Savage and find out the truth behind stateroom B340. There is no way out but his. In Soulmate there is a masquerade ball aboard the Queen Mary and Graceful Gale is searching for her eternal soulmate. Could it be you? Using the real life rooms and corridors in the ship makes these mazes extra creepy. There are some very impressive rooms adorning the décor of yesteryear including a bridge you must cross overlooking a giant engine room. We have all seen images of these old ships in pictures and movies, but actually walking through them in the dark is a very different experience.

One of the effective effects used throughout the mazes at the Queen Mary are floor effects. In some cases the floor is on hydraulics causing it to raise and lower as you cross old bridges. There are also sliding pathways making it difficult to walk straight and of course the previously mentioned ball pit.

If you’re a fan of live entertainment there is definitely plenty of it to be enjoyed. There is a new area called “Sideshow: Freaks & Oddities” (up charge) which houses a bar as well as a stage with many performances consistently throughout the night. The same can be said about the Main Stage area which is open to everyone attending. In addition you can enjoy performances throughout the night of monster sliders on sliders alley. Overall, the Queen Mary Dark Harbor is having one of its best years this season and I would definitely add it to my list of haunts to visit this Halloween season.