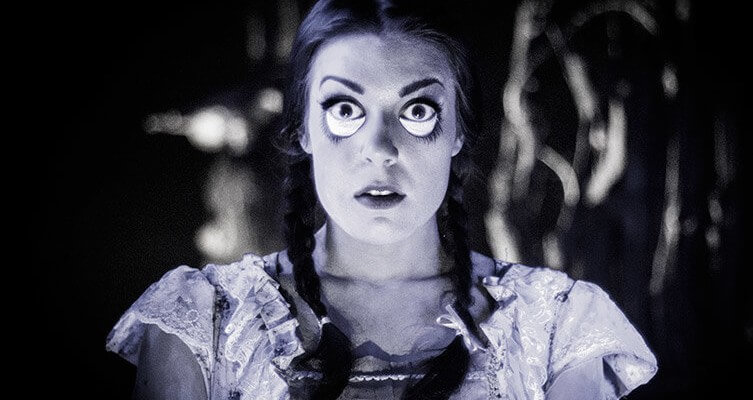 [Warning: the following is a Halloween preview and contains images and video that may not be suitable for all ages – enjoy at your own risk]

“We have unfinished business, you and I. . . “announces the mysterious voice from an entity claiming to be The Shadow That No Longer Fears the Light.  Demanding to be a part of the fear and promising “so much fun”, this horrifying creature is the center of the newly released teaser video from Pittsburgh’s infamous Scarehouse taunting the arrival of the attraction’s newest haunt for 2016: INFERNAL. Scarehouse, billed as “the scariest haunted house in America”, has won praise from the likes of Elijah Wood and Guillermo del Toro for its over the top, immersive haunts. Last year, the attraction teamed up with Legendary’s Michael Dougherty to bring the horrors of his film Krampus to life in one of their four monstrous mazes (story here).  For 2016, Scarehouse boasts three original haunts (and promises some surprises from Legendary Entertainment as well):

The Summoning – “Prepare to enter a hidden world of secret societies, arcane rituals and demonic visitors”

Infernal – New for 2016, little has been revealed for this haunt except what is seen in the teaser video

??? – Another new attraction for 2016, this is a yet to be revealed haunt, but fans can sign up for their mailing list to receive details as they are released.

We’re still working with LEGENDARY this year, which means some fun surprises yet to be revealed, but our new attractions are both original concepts from the ScareHouse design team.  -Scarehouse Perhaps the most notorious attraction at Scarehouse is the basement. Where the immersive environments of their annual haunts can be considered extreme, the Basement takes fear further by, as Elijah Wood calls it, becoming intensely invasive. Requiring a waiver prior to entry, this 35-minute experience is NOT for the faint of heart as victims are grabbed, confined (including having a burlap sack thrust over their heads and explicitly taunted) as they strain to survive the nightmare. Tickets are already on sale for Scarehouse’s famous haunts.  The fiendish fun runs through select nights from September 16th through October 30th (Thursdays and Sundays 7 pm to 10 pm; Fridays and Saturdays 7 pm to Midnight).

Fans of fright can also sign up to receive updates with new videos every week to take you inside the entire process of production and operation. You can subscribe to their YouTube channel to see “ScareHouse Weekly” videos every Thursday from now through November.

BONUS: ITM visited ScareHouse in 2014 and came face to face with Sam of “Trick or Treat” fame in the Summoning haunt: