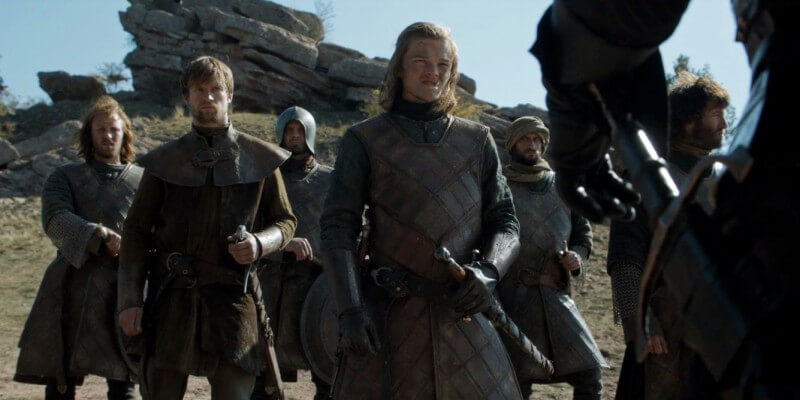 Much like the real world, “Game of Thrones” is populated by many different religions. There are the old gods of the forest, the Drowned God of the Iron Islands, the Lord of Light, and, most popular in Westeros, the “new” god of the Andals. Now it seems there may be another contender.

Jon Snow’s awakening last week came as no surprise to most fans of the series, but the characters at the Wall took it as much more of a shock. In fact, the Wildlings recruited by Edd to reclaim Castle Black now seem to worship at the altar of Jon.

Meanwhile, Sam and Gilly appeared for the first time this season– headed to Old Town, but Sam wants to drop off his beloved and her son at his parent’s place first.

Perhaps the most intriguing part of the episode came in the form of Bran’s second trip back into his family’s past, this time to witness his father Ned’s semi-heroic rescue of his own sister Lyanna from the clutches of Rhaegar Targaryen. This almost-revelation seemed to hint at a confirmation of a long-held theory among “A Song of Ice and Fire” devotees. (For more information, Google the phrase “R+L=J”).

Varys and Tyrion are doing their best to keep the Sons of the Harpy at bay in Meereen, and Cersei still faces a similarly religious challenge in King’s Landing with the High Sparrow, who strikes back by taking a hesitant King Tommen under his wing. Back in Essos, Daenerys is captive of a Dothraki horde once again, and is brought to the city of Vaes Dothrak to unwillingly live out her days among the other former khaleesi. Seems like more wheel-spinning for the Mother of Dragons, but I suppose we’ll see where this particular story thread goes.

In Braavos, Arya continues her training with the Faceless Men, and she finally reaches a level of achievement wherein Jaqen H’ghar rewards her with her returned eyesight. We are also treated to a revisit of Arya’s infamous wish-list of revenge kills, so perhaps that notion will once again factor into the long game for her character. The truly bad news of the week arrived at Winterfell, where Ramsay Bolton was brought the gift of a captured Rickon Stark and his guardian Osha, along with the head of his direwolf Shaggydog. We already know what nightmarish deeds Ramsay is capable of, but now that Sansa and Theon have escaped, killing Ramsay’s girlfriend in the process, he’s not likely to treat other Starks with much kindness.

The episode ended back at the Wall, where Jon is faced with the task of executing the men (and one child) who assassinated him. He then uses his own death and resurrection as an excuse to break his oath to the Night’s Watch, giving us this episode’s title. Besides the exciting Ned Stark flashback via Bran’s vision, this was a much slower-paced episode than last week’s, with fewer shock reveals and more deliberately-meted-out setup for future events. I’m most curious to know where Jon is headed (one can only assume south) and it will be interesting to see him in a different location for the first time in a long time.

Comments Off on REVIEW: “Game of Thrones” continues to look into the past and fear the future in this week’s episode, “Oathbreaker”