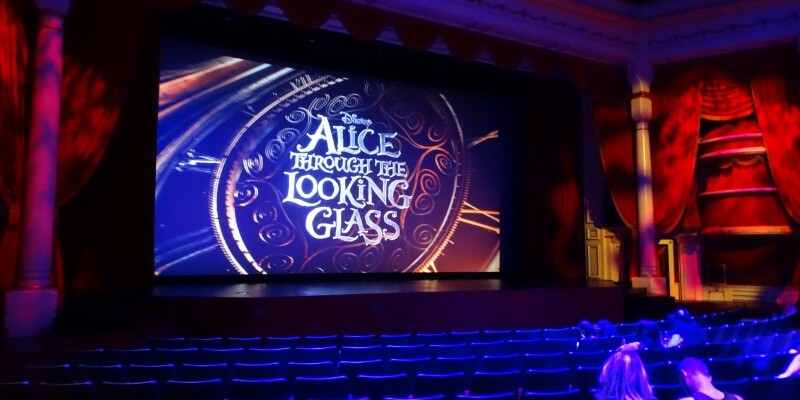 In ten days you’ll be able to see “Alice Through the Looking Glass,” the sequel to Tim Burton’s 2010 live-action-meets-CGI reimagining of the classic Lewis Carroll tale “Alice in Wonderland,” in theaters. But for now you can visit Disney California Adventure for an extended preview of the new movie, as has become the tradition for many of Disney’s recent releases, including “Zootopia” and “The Good Dinosaur.”

This time around the sneak peek is located in the former Muppet Vision theater, where the “Frozen” sing-along show was located until recently. The sequel’s director James Bobin (“The Muppets,”) introduces the roughly ten-minute montage of scenes paired with a longer version of the film’s theatrical trailer.

Check out the decor surrounding the preview’s entrance, and the activities inside the building in the video below:

Outside the theater you’ll find an oversized tea set and some light-up giant playing cards– modified props left over from the park’s now-retired Mad T Party Band. Inside the lobby, before you enter the auditorium, is a nifty interactive photo/video booth that uses facial identification technology to morph you into your favorite character from the “Alice” series. “Alice Through the Looking Glass” opens nationwide on Friday, May 27th.