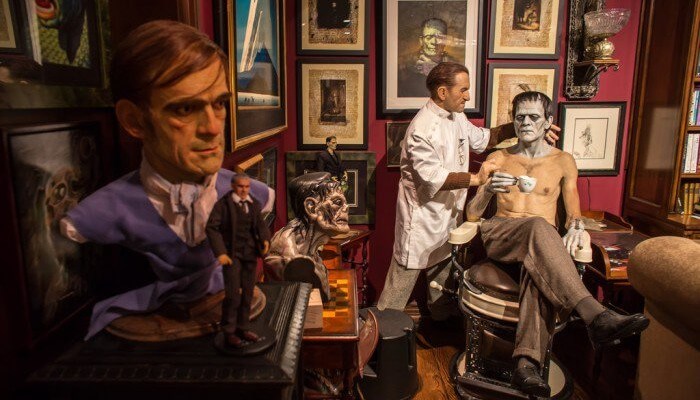 From Hell Boy to the eventual Haunted Mansion movie (see, Mr. del Toro we’re STILL waiting and counting on you), he has been delightfully terrorizing us with his own brand of madness and monsters. With titles like Crimson Peak, Pan’s Labyrinth, Pacific Rim, the Strain and Don’t be Afraid of the Dark, del Toro’s imagination spans a dark and deeply diverse field of fiendish fun. Bleakhouse, del Toro’s home, is renowned for its collection of film treasures, artwork, and unusual collectables acquired over his lifetime of crafting tales of horror. So creepy is the collection that his daughters refuse to have anything to do with it, so the collection serves as inspiration for del Toro, who has turned the location into a work space.  There are over 700 pieces of original art and entire themed rooms (like the Dickens room or Nosferatu corridor) and even a few “secret passages”. Once asked by Jimmy Kimmel if would eventually turn the home into a museum, del Toro replied that he did give an occasional tour, but said a traveling exhibition is more likely. Now that will be a reality starting this July when about 500 items from Bleak House will go on tour.

GUILLERMO DEL TORO: AT HOME WITH MONSTERS will open at the Los Angeles County Museum of Art on July 31st (through November 27th).  The L.A. museum will get to keep several items for their permanent collection.  Next, according to a tweet by del Toro, the creepy collection will visit Minneapolis (2/26/17), Toronto (9/30/17-1/7/18), Mexico City, Barcelona and New York (though the LACMA says only Minneapolis and Toronto are on the tour).

According to del Toro’s official website, highlights of the tour, which is “organized into eight thematic sections”, include: For those who want to dive deeper into the collection (or cannot make it to any of the tour stops), a companion book, Guillermo del Toro: At Home with Monsters: Inside His Films, Notebooks and Collections will be released on July 26 this year.