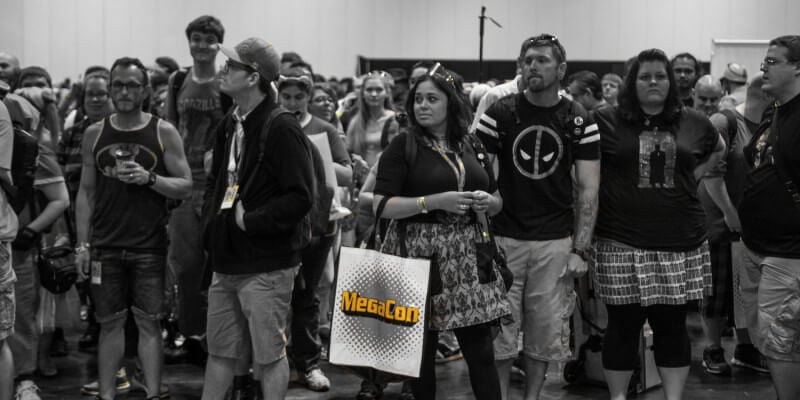 This year marks the first year that MegaCon’s new owners are driving the huge pop culture convention. Adding an extra day and moving it to Memorial Day weekend seemed like a shot across the bow of other Orlando conventions usually operating that same weekend, but that hasn’t stopped the new owners from lining up an all-star event. The 2016 show is sure to surpass the 80,000+ fans that were in attendance from last year. Note that this is only a partial list to the massive line-up of Science Fiction, Comic, Horror, Anime, Animation, Gaming, and Cosplay guests – see the full list here. Along with the impressive roll call there are several organizations displaying their crafts (think a T.A.R.D.I.S. or T.I.E. Fighter or Steam-punk Airship) that offer unique photo opportunities. In anticipation of an amazingly busy and fun filled weekend, ITM takes a peek back at MegaCon 2015 and shares a few lessons learned (along with a few choice photographs from last year’s event).

There are few things we learned racing from panel to panel and everything in-between.

First – arrive early, before the doors open, before the parking lot gets busy.  When it took 45+ minutes to get from the Beachline (one of the main highways traversing Central Florida) exit for the Orange County Convention Center (OCCC) to the actual OCCC parking lot, we made that mistake only once – the following days we arrived between 7am and 8am (doors to the show open at 10am Friday, Saturday, and Sunday). Stay hydrated and take time to eat.  Bring snacks and water and make sure to leave time in the scurry from event to event to eat – your body will appreciate this extra attention fueling up.  There are food vendors at the convention center where you can expect to find a decent meal but at a cost – both time (usually long lines) and to your wallet (prices tend to be higher than similar venues outside the OCCC campus).

Bathe – please.  While the Orange County Convention Center is the 2nd largest in the country – you will be among thousands of fellow fans – at times in thick, crowded hallways and standing room only auditoriums.  Add that to the abundance of heavy/hot costumes and the need to remember to use soap and deodorant becomes more than obvious. Plan – Download/review the event schedule (available May 16th) and plan your day.  Leave time to line up for popular events and arrive early.  Be prepared to choose between closely scheduled events in order to have time to queue up for the one of your choice.  Allow time to navigate crowded halls and even more crowded vendor area (especially on Satuday). NOTE – The John Barrowman QA is something that MUST be seen (one of thee most entertaining QA sessions at any convention). Bring a camera – in addition to the club and organization displays, thousands of amazing costumed fans find their way to the convention halls to display their cosplay creations.  If going in costume, keep an eye out for planned themed photo meet-ups (like Disney characters, Marvel or DC heroes/villains, Harry Potter, Star Wars and more) Be patient and have FUN – a little patience for a badge check or lengthy queue goes a long way to ensuring a fun weekend.

Take a look at the after-hours events too – there are parties, raves, comedy shows and more that go on after the ‘normal’ convention hours that limit the vendor and autograph areas.  Moshi’s after party is always a popular event but again, be prepared for a well-attended party with a bit of a line to get in the door). Megacon lands at the Orange County Convention Center in Orlando FL May 26-29th.  Tickets and additional information can be found at their website.