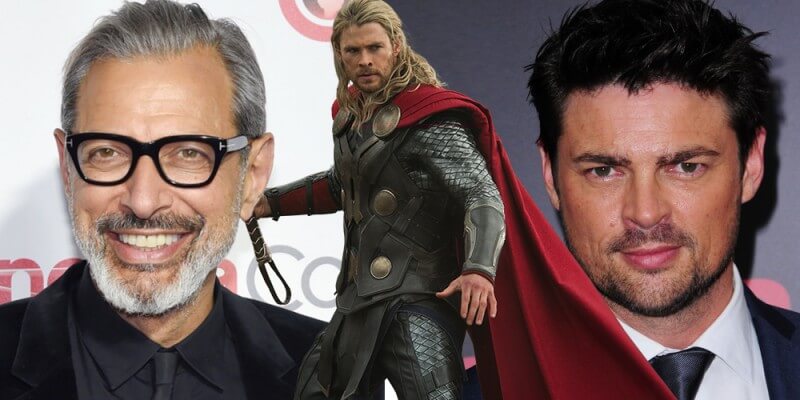 In about of fantastically awesome casting news, it looks like Marvel and Disney have officially cast Jeff Goldblum and Karl Urban in the upcoming live-action comic epic Thor: Ragnarok. Also confirmed for the film are Cate Blanchett, Tessa Thompson, and Mark Ruffalo. This will mark Goldblum’s first appearance in a comic book movie, while Urban is well known for playing Judge Dredd in the 2012 film Dredd — a sleeper cult favorite.

Check out the full press release below:

Two-time Oscar®-winner Cate Blanchett (“Blue Jasmine,” “Carol, “Cinderella”) joins Marvel Studios’ “Thor: Ragnarok” as the mysterious and powerful new villain Hela, along with Jeff Goldblum (the upcoming “Independence Day: Resurgence,” “The Grand Budapest Hotel,” “Jurassic Park”) who joins the cast as the eccentric Grandmaster, Tessa Thompson (“Creed,” “Selma”) who will bring the classic hero Valkyrie to life on the big screen, and Karl Urban (“Star Trek” trilogy, “The Lord of the Rings: Return of the King”) who will add his might to the fray as Skurge.

Rounding out the cast for the film is three-time Oscar-nominee Mark Ruffalo (“Spotlight,” “The Kids Are All Right,” “Foxcatcher”), reprising his role of Bruce Banner/the Hulk from “Marvel’s The Avengers” and Marvel’s “Avengers: Age of Ultron.”

“The continuation of the epic Thor franchise will be powerful and unique, and with the additions of Cate, Jeff, Tessa, Karl, and Mark to the cast we have the makings of his most dangerous and heroic adventure yet,” said Producer Kevin Feige. “The sheer, raw talent each of these actors brings to the screen can’t be quantified. Having any one of them join the Marvel Cinematic Universe would be an honor, and having all of them is incredible.”

So what do you guys think? Are you super excited about the cast lineup of Marvel’s next big movie event? Let me know in the comments below, and as always, stick with ITM for everything thunder-god!