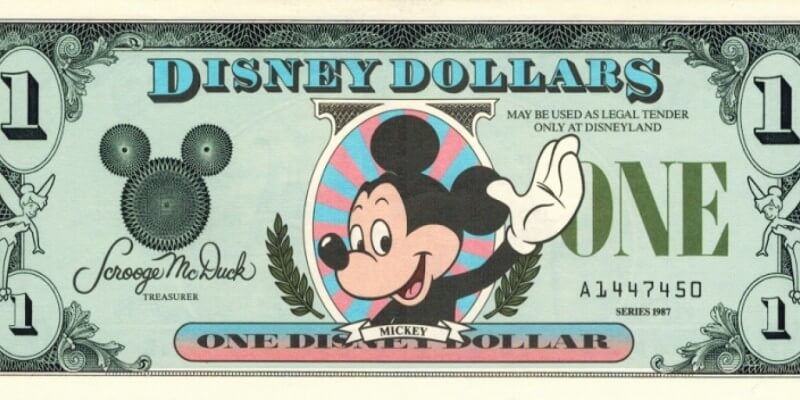 Bad news for collectors, as it was recently announced that the cherished Disney Dollars will officially be out of circulation.

Widely reported earlier this week, a statement from Disney released Thursday officially confirmed that circulation will be concluded on Saturday. This is large because gift cards and actual human money made the funny money obsolete. There just wasn’t room for them anymore. Featured Disney characters on the front, and came in increments of $1, $5, $10, $20, and $50.

“It’s a testimony to the enthusiasm and heart of Disney guests and collectors that Disney Dollars remain collectible today,” the Disneyland statement said. “We continue to offer many ways to collect cherished Disney memories in tangible ways.” Disney Dollars have been around since back in the Jack Lindquist days. See, he invented Disney Dollars because of the Anaheim and Orlando theme park’s growing popularity in the mid-1980s and they blew up in popularity for the beginning of their run. The first runs were unveiled and circulated on May 5, 1987, and now, they will conclude in 2016.

“We set the criteria that our Disney money would always be tied to the price of the U.S. currency, so if a dollar is worth a dollar, a Disney Dollar would be worth a U.S. dollar,” Lindquist said in his memoir, “In Service to the Mouse.” “That way, the money could be spent in the parks, the same way U.S. currency is.”

So what do you think of them getting rid of the Disney Dollars? Do you have any leftovers from the past? Let me know in the comments below!