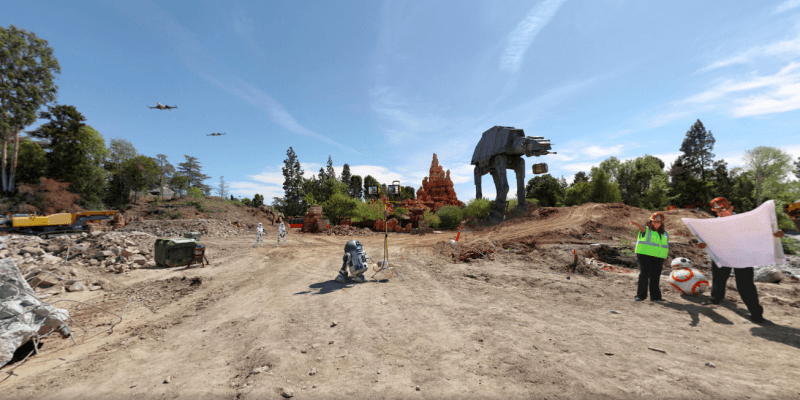 Disney Parks has released a brand new 360-degree video of the construction site at Disneyland in preparation for the Star Wars-themed land that will blow minds once it’s finished.

The video was made to commemorate the official groundbreaking of the 14-acre land at both Disneyland and Disney’s Hollywood Studios in Walt Disney World.

Look, I don’t know about you — and I don’t want to tell Disney how to run their parks either — but it seems a little reckless to be using First Order Stormtroopers to patrol the area and using AT-AT Walkers and TIE Fighters to deliver construction materials. But that’s just me. We also see BB-8 and R2-D2 on the scene as well so hopefully they’ll keep an eye on everything and will report back to the Resistance should anything dangerous pop up.

According to Disney’s press release, “work has now begun to build the largest-ever single-themed land expansions, where guests will be transported to a never-before-seen planet inhabited by humanoids, droids and many others and they can experience their own Star Wars adventures.”

You’re already here at Inside the Magic, so make sure to stay here for future updates to the new Star Wars-themed lands coming to Disneyland and Disney’s Hollywood Studios!