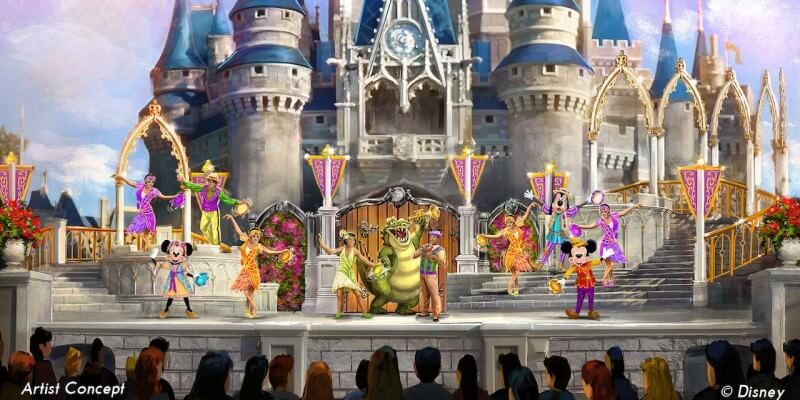 The all new “Mickey’s Royal Friendship Faire” stage show will begin performances in June, it was announced today by Walt Disney World.

The show is replacing the popular “Dream Along With Mickey”, which was performed at Cinderella’s Castle for the past several years. Disney Parks Blog has all the info on the announcement today.

Beginning this summer, Mickey Mouse and his friends will welcome favorite characters from some of Disney’s newest classics in “Mickey’s Royal Friendship Faire.” This all-new live stage show makes its debut in June on the Cinderella Castle Forecourt Stage at Magic Kingdom Park, with special appearances by Tiana and Naveen from “The Princess and the Frog,” Rapunzel and Flynn from “Tangled” and Anna and Elsa from “Frozen.”

In the show, Mickey and his troupe of Merry Makers have been preparing to host a joyous festival and have ventured far and wide to invite friends from other lands to join their celebration. From the Land of the Bewitching Bayous, Goofy has invited Tiana, Naveen and Louis to add a little spice of New Orleans jazz to the party. From the Land of the Enchanted Woods, Donald Duck brings some new friends he met at the Snuggly Duckling, and Daisy introduces us to her special guests, Rapunzel and Flynn. Finally, Mickey shares a surprise with Minnie, as he has traveled to the Land of the Mystic Mountains to invite Olaf, Anna and Elsa, who contributes a blast of her icy magic. It all culminates in a grand dance, as the Merry Makers invite all their new friends to join in the fun on this special day in Magic Kingdom Park.

Keep it locked here on Inside the Magic for more exciting Disney news today and every day!