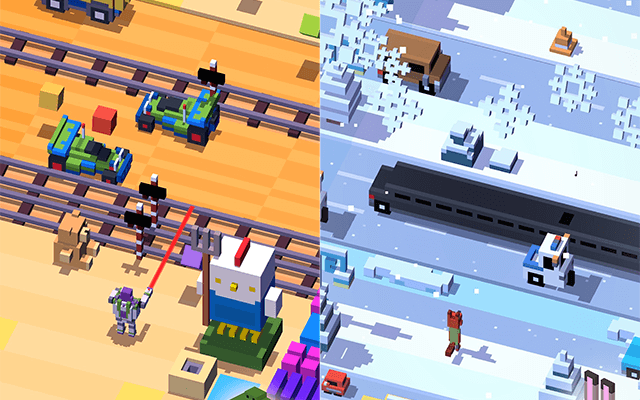 Disney fans, prep your thumbs because you’re going to be doing a lot of jumping for joy. And also to cross some perilous roads.

Game developer Hipster Whale has joined forces to bring you Disney Crossy Road, which is now available across all major platforms for free! All your favorite characters have come to life in adorable 8-bit fashion, with plenty more to unlock once you get deep into the game. Tech Times has an interview with the developers that sheds some more light on the collaboration and what die-hard gamers can expect from this new version.

“Most of us have played Crossy Road and love the game. We love what it does, how it brings in all ages, male, female. We always try to strive to do that with our own films, our own franchises, so it was the perfect match,” Keith Michaelis, Senior Producer at Disney told Tech Times.

“From our point of view, it was a chance to reboot and solve some of little those problems that happened in Crossy Road because we made it so quickly,” Matt Hall, co-founder of Hipster Whale added.

You start off with nine Disney-themed worlds born out of classic and newer films (Lion King, Toy Story, Inside Out) and even theme parks such as Haunted Mansion. The game is packed with various characters such as Wreck-It Ralph, Mickey Mouse, Buzz Lightyear, Baymax, Nick Wilde and many, many more.

“In each world, we added a different way to play,” Hall said. “The laws change depending on what world you go to, so getting a high score on Toy Story is going to be very different from Wreck-It Ralph.”

Check out the rest of the interview right here.