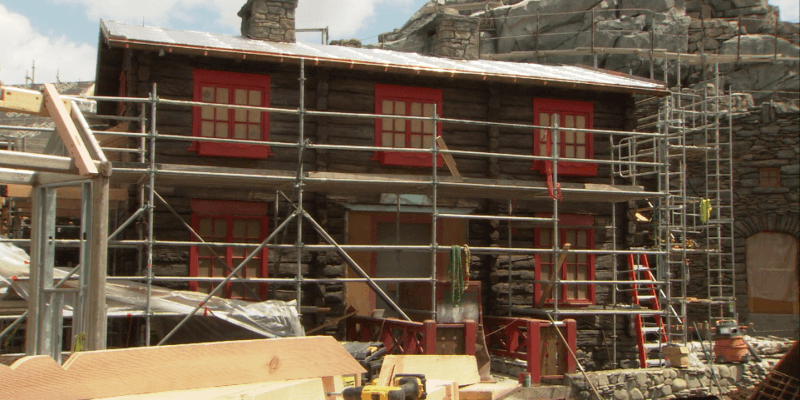 The Frozen Ever After expansion at Epcot has been getting some serious hype as of late, and we got the chance to go behind the wall of the construction and see what it’s all about.

First thing’s first: what they have going on right now is gorgeous. It doesn’t destroy the luster of the original Norway Pavilion, but extends it to the left with the intent of immersing guests in something a little different than what they’ve come to expect from Epcot. The area was obviously still heavily under construction, but the detail and passion behind the project was still very evident. While we weren’t allowed to take photo or video, I’ll do my best to explain a little bit about what I saw. The first thing I noticed instantly is that the architecture from the movie was alive and well: Cottages look lived in, and giant rocks look like they’ve been there for generations. There’s a very clear lore and history behind the works of art they are building for the expansion, and for such a small portion of the park, the result is just as transcendent as any other area of the Epcot World Showcase. Nothing feels too “cartoony” or out of place — basically, it’s not some awkward extension of New Fantasyland.

It’s also worth noting that the runestones in the middle of the Royal Sommerhaus area are ripped straight from the Maelstrom ride, as a tip of the hat to Disney’s history. The entire area (and ride) will also be taking place AFTER the events of the movie, with peace returned to the land, and Elsa in control of her powers. All in all, this experience got me incredibly excited for Walt Disney World’s first massive Frozen expansion — and I was one of those guys who got sick of it after the hype exploded. So if I’m not the target market and I got a kick out of everything, diehard fans around the world will find something to gush over in just about every nook and cranny of Frozen Ever After. For all things Frozen, stick with ITM! and while we are waiting for this thing to officially open (“in Sunmmeeeerrrr!”), let me know what you think! Are you excited about the world of Arendelle coming to life? Sound off!

Comments Off on Behind-the-Wall: Frozen Ever After and Royal Sommerhaus preview revealed at Epcot