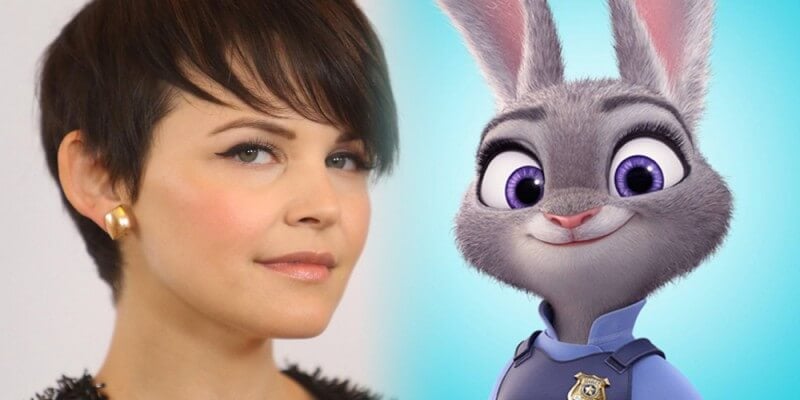 While Disney’s next big animated feature Zootopia may open on March 4, we had the opportunity to sit down with Once Upon a Time star Ginnifer Goodwin to discuss her experience living the life of an animated leading-lady.

For those that are blissfully unaware, Zootopia centers around a world of animals that have evolved beyond their primal instincts. Mammals live in harmony without the fear of tearing each other to shreds and hunting for sustenance. Goodwin’s character Judy Hopps, an ambitious bunny, is dead-set on making a name for herself in the big city as the world’s first “Bunny Cop”. When she gets wound up with sly fox Nick Wilde (played by Jason Bateman), the adventure spirals out of control into an epic mystery that spans throughout some of the major boroughs of Zootopia. When asked how she could compare herself and her animated character, Goodwin only had to be herself.

“I feel like they just animated me. I mean, there are qualities I Judy has that I wish I had, but then there are a lot of overlapping things. I feel like I’m seriously optimistic and ambitious, but I think we’re also a bit idealistic and a bit self-righteous. I would like to think I take as much responsibility for my actions as she does, but I’m sure I don’t — I wish I were as fearless as Judy. But we’re both criers!” While it seems like voice acting would be just as easy as stepping up to a microphone, it’s not without its fair share of challenges. To channel the right attitude and discipline for such a major role in an animated feature film, Goodwin had to switch gears.

“It’s challenging, but it’s more liberating than live-action acting. To be on camera is to control. Everything has to be controlled, and you’re using that control to make something real,” Goodwin continued “With voice-over acting, you’re relinquishing that control. It’s an animator’s medium, it’s an editor’s medium. So it’s more about giving the director’s 400,000 versions of every scene and letting them piece together what the character is going to be. And we don’t know what that’s going to look like until we see the film.”

Goodwin admitted that she’s been a lifelong Disney fan since childhood, and she spends a good amount of time traversing Disneyland every month. So, when she got the call that she was asked to be in Walt Disney Animation Studios’ 55th animated feature, her answer was a no-brainer: “When I got the call, my agent was like ‘Well, don’t you want to know what the offer is?’ and I was like ‘No! I want you to make this legally binding! I’m doing it. You can’t back out of this offer…then you can call me and tell me what it is.”

While at times a lighthearted family comedy, Zootopia also tends to tackle some of the tougher topics facing society today, including diversity and profiling others.

“That’s what I think makes it so special: it’s a comedy, it’s an action movie, it’s a buddy-cop movie, it’s about friendship, it’s a homage to film noire and old Hollywood. Yet, there are underlying themes that I really hope people carry with them when they leave. Most articulated is the idea that ‘you are what you are’ or ‘anyone can be anything’. That’s the first thing I hope my kids would pick up on when they’re finally old enough to see the movie.” Another fascinating aspect of the film is the very human relationship between the two leads, Nick and Judy. The “impossible friendship” trope has existed for ages, but there’s something uniquely special about Zootopia‘s protagonists: “One of the things I love most about the movie is that it’s so rare that we just have a platonic friendship. A male and female character. There’s no sexuality there, and I think that’s part of what makes it so brilliant. That you can have such a gorgeous relationship and you don’t have to bring sex into it.”

As an avid park-goer, Goodwin has a city-sized dream for the physical, potential future of the franchise: “I have been talking about this to the higher-ups any time I run into anybody who runs the studio or the parks, because I can’t think of anything better than having a full-blown Zootopia at the parks. I mean, I want all of the worlds.”

We can only hope she gets her wish. The world itself is absolutely breathtaking with an almost obsessive attention to detail. Having Zootopia  come alive for families at one of the Disney theme parks would seem like a dream come true. As for a possible sequel to the film, that’s obviously way down the road. But that hasn’t stopped Goodewin from brainstorming a few ideas.

“I would like to see Nick have to prove to Judy that the world is worth saving. I’d like their roles to flip-flop, to see her go to her darker place and have Nick be the one who pulls her out of it.”

For more information on all things Zootopia, stay glued to Inside The Magic!