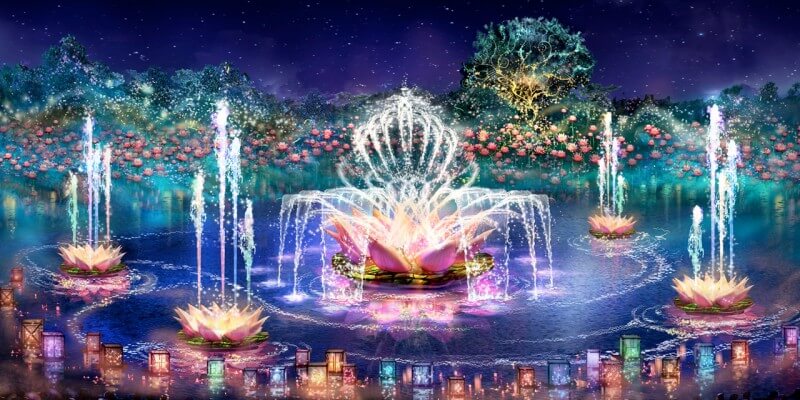 Who’s ready to light up the night, Disney style?!

Breaking news from Disney Parks Blog today as a release date was announced for Disney’s Animal Kingdom’s first ever nighttime show, Rivers of Light. The spectacle will officially kick off on April 22, 2016.

Set on Discovery River in the Asian section of the park, the show itself will depict an ancient lantern festival guided by two storytellers who call forth the Spirit Guides (an Asian Tiger, Tropical Turtle, African Elephant and Great Horned Owl) to lead the audience through their journey. They also released a fancy new video showcasing some of what will be involved!

Additionally, a live chat over at the Disney Parks Blog has been announced for March 8 at 1:15 p.m. featuring two of the show’s creative team members, Michael Jung and Mark Renfrow. They’ll be on hand to answer any and all questions about the new show, offering an exclusive sneak peek into the behind the scenes of what looks to be an amazing and unforgettable show.

It was also reported by Walt Disney World News that the entirety of Animal Kingdom will be affected by the nighttime festivities. Here are some things to expect:

The Tree of Life Awakens
Nearby on Discovery Island the area will come alive each night with a celebration filled with music and dance. The theme park’s iconic Tree of Life will undergo extraordinary “awakenings” throughout the evening as the animal spirits are brought to life by magical fireflies that open a window into the body of the tree, revealing colorful stories of wonder and enchantment.

Kilimanjaro Safaris after Dark
Each evening, the popular Kilimanjaro Safaris daytime experience is artfully bathed in the look of sunset with special lighting allowing guests to explore and enjoy this attraction well into the night. During the expedition guests can now enjoy the wildlife at night, and may discover two new species: African wild dogs and hyenas.

Harambe Wildlife Parti/Discovery Island Carnivale
When the sun sets, the popular Village of Harambe will become a hot spot with the new Harambe Wildlife Parti. Here, “party animals” can dance alongside local street musicians and entertainers, partake in exotic foods and libations and explore the diverse wares of village artisans and merchants.   And the new Discovery Island Carnivale will captivate guests with lively music, spirited dance, vibrant costumes, and tasty culinary creations, spreading from one end of the island to the other.

WDW News also reports that, in addition to the new entertainment offerings beginning this summer, park guest will by able to enjoy Disney’s Animal Kingdom’s newest eatery, Tiffins. It will be open for both lunch and dinner, and will celebrate the art of traveling and include waterfront views from both indoor and outdoor seating areas. For those not in the know, “Tiffin” is an Indian English word meaning midday meal or type of container used to carry food while traveling.

What do you think? Are you excited for the new transformations coming to Disney’s Animal Kingdom? Let us know your thoughts in the comments below!