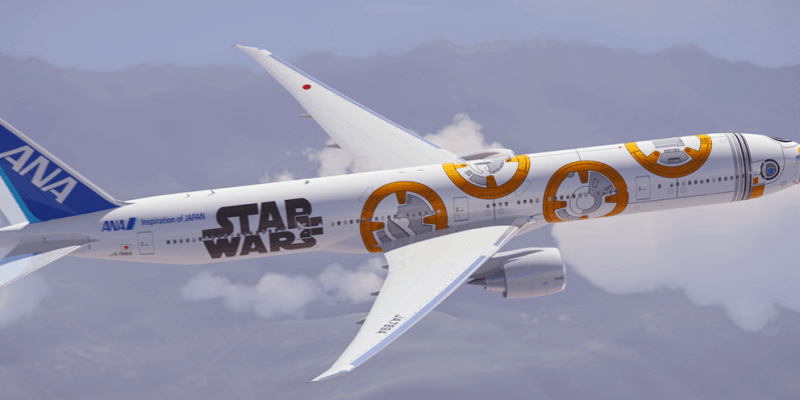 Way back in November we shared a preview of the brand-new “Star Wars”-themed jets from the ANA (All-Nippon Airways) airline based out of Japan. While the first flight of the R2-D2 plane happened back in the fall, the BB-8 and “Star Wars” logo jets have also recently made their debuts.

The BB-8 plane had its first flight today, March 28th from Itami to Haneda in Japan. From March 29th through April 8th it will make regular journeys from Narita to Los Angeles and back. After April 9th it will begin to travel other international routes, such as from Japan to Chicago, New York, Washington D.C, Houston, and Singapore.

UPDATE: We have received photos from the landing of the ceremonial first flight of the BB-8 aircraft in Los Angeles, with a guest appearance by none other than everyone’s favorite new droid:

The Star Wars logo planes (with smaller images of R2-D2 and BB-8) are currently used in domestic Japan flights only. Be sure to visit the official ANA Star Wars website for more information and many more photos!