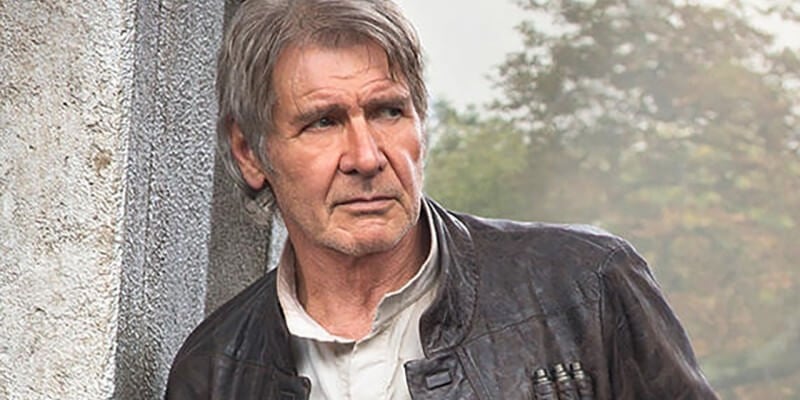 Today, Harrison Ford held a charming little Q&A on Entertainment Weekly’s Tumblr page. It was appropriately awesome. Ford started off with a photo of him upside down with the caption: “Hi everybody, sorry I’m upside down today. I woke up on the wrong side of the bed. Upside down and backwards. – Harrison Ford”

And then it began (warning, Star Wars spoilers follow):

How do you drink your coffee?

Are you and John Boyega best friends?

What advice would you give to young aspiring filmmakers?

Figure out how to do it for themselves and not to take anybody’s advice.

What do you think of Adam Driver, what is he like to work with?

He’s an absolute pleasure. He works independently with real proper ambition. He brings a lot to the table. He’s a wonderful actor and a very kind, generous human being.

what was the last movie you watched?

A BBC television movie that my son, Liam wanted to see. Can’t remember the name.

I have heard that you are also a pilot. What inspired you to be one?

I wanted to learn something. I hadn’t learned anything for a while and I thought it would be interesting and challenging. I always wanted to fly, but I wasn’t able to afford it at first. It’s one of the best things I’ve ever done.

What is the weirdest advice anyone has ever given you?

When I was preparing to play a newscaster for “Morning Glory”, I took some lessons from an online school for newscasters and they told me to look into the camera and imagine I was talking to my best friend.

Who’s cuter, you or Daisy Ridley?

Hi! I’ve read that research is important for you before shooting a movie. What’s your usual research process for a part?

It depends on what I’m researching and what I think I need to know to understand the character’s work or circumstances.

Who did you have the most closest relationship with on the set of Star Wars?

You’ve been actively involved in environmental causes. What according to you is the biggest issue currently endangering our planet? What do you think should be the top most priority in today’s scenario, as far as the environment is concerned.

Indiana Jones wears a leather jacket in the jungle…I’ve never had a proper explanation for that, but it looks cool. I’ll say that can sometimes be the most uncomfortable.

What’s your favorite Halloween costume that you’ve ever worn?

I was a dog in a hotdog suit.

Why did you dress up as a dog in a hotdog suit on Jimmy Kimmel?

Because I could..and I had the outfit.

JJ is very active in the shooting of his movies, what is your favorite quality that he possesses?

Who made the funniest joke on the set of the force awakens?

On a film as big as Star Wars, with so many on-set explosions and green screens and CGI characters, are there tricks you use as an actor to stay focused and present and in character?

I focus on the kernel of story that needs to be given expression…serve the story.

I understand you are an avid carpenter. What sort of things do you prefer to work on?

I have a door that needs to be rehung.

Will you go to the Disney Star Wars park when it’s finished?

You’ve played a vast array of characters, traveled to numerous destinations, and met many influential people- but what remains on your bucket list that you’re most excited to cross off?

Harrison, do you have any book recommendations?

Yes. Being Mortal by Atul Gawande. It’s about not trying to live forever.

We know Indiana Jones hates snakes, but what about you, Harrison? What do you think about snakes? Love ’em? Hate ’em? Ugh-get-’em-off-me?

No, I don’t mind snakes at all. Next to John Boyega, they’re almost my new best friends.

You went to go see Hamilton a couple of days ago? How was the play and would you ever do a play of your own?

Unbelievable, complex, exciting, talented and provocative. Just a mind blowing experience. I really enjoyed meeting some of the people involved with it afterwards.

If I have a party when I get The Force Awakens on DVD, will you come?

No. But thank you.

How do you feel about the ending in The Force Awakens? (I myself am heartbroken)

I think it’s a fitting use of the character. I’ve been arguing for Han Solo to die for about 30 years, not because I was tired of him or because he’s boring, but his sacrifice for the other characters would lend gravitas and emotional weight.

Out of all the characters you’ve ever played, which one do you relate to the most?

Every character I’ve ever played is informed by my own experience, my own emotion, my own understanding.

What is your favorite plane?

Do you ever watch movies that you’ve starred in before?

Every once in a while, but not for fun.

If the cast of The Force Awakens was stuck on an island, who would be the leader and why?

I would be the leader. Just cause. Although we’d end up having to listen to Carrie because if Mama’s not happy, nobody’s happy.

Mr. Ford, have you ever considered doing a voice acting role for an animated movie? You’ve got such a cool voice!

I’d love it. Waiting for a good fit.

Thanks so much for your questions!

For all things Star Wars, stick with Inside The Magic!