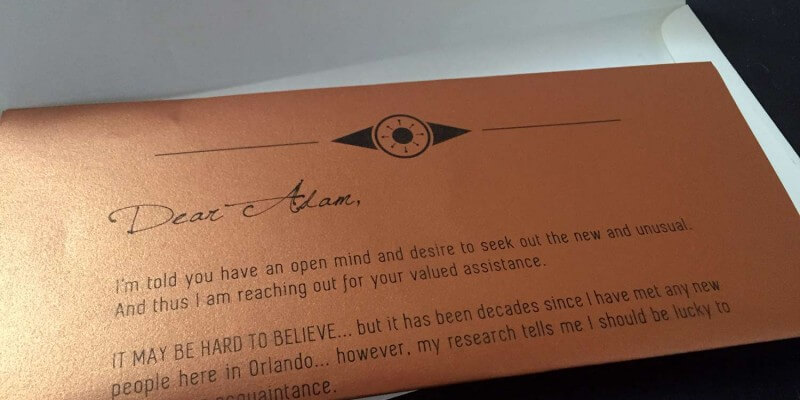 There is a big question being asked to all of Orlando that’s attracting a lot of attention: What is Penumbra?

I first became aware of this mystery, billed as “Orlando’s Biggest Secret,” when an e-mail from someone named K. Alexander arrived to me a couple weeks ago. He asked for my mailing address, promising to deliver something interesting to me. As Inside the Magic‘s newest reporter, I jumped at the opportunity to dive into my first odd assignment. Local attractions love to tease fans and press before their announcements and this seemed to fit in.

It wasn’t until I received a letter in the mail that I first read the name “Penumbra” – whatever that is. The confidential-marked envelope certainly piqued my interest. Inside, an eye seemed to stare back at me as I opened the envelope, further revealing a shiny letter from K. Alexander, apparently the founder of Penumbra. Three small slips of paper accompanied the letter as well, reading “WHEN SHADOWS FALL,” “AS PHANTOMS,” and “FRIGHTEN BEASTS.”

So what is Penumbra?

K. Alexander tells me that I should go to aNewSociety.com to find out, after rambling on about a 2,000-year old vision of a “just and virtuous society.”

A visit to that web site reveals – a lot. It seems Penumbra is a literal society within our society that’s been hidden for 28 years, soon ready to begin accepting new citizens when their doors open “later this year.” (That’s a lot to swallow…)

There’s also a wonderfully creepy video that features K. Alexander himself – before it derails on a tirade about how Penumbra is the “harvest” that will save the world from the tyrannies of the modern political system. Creepy. If this is real, I’m a little scared.

But there is definitely more mystery to be found here. Digging around online, many others are indeed asking the question: What is Penumbra?

In fact, there’s a hashtag – #whatispenumbra – in which people have posted photos of posters around town they’ve spotted. Others seem to have received the same letter I did as well.

Some on reddit are suggesting Penumbra Orlando is a cult. Others chalk it up to viral marketing. And others still have decided it’s an ARG – an alternate reality game – which in itself is usually tied to marketing as well. There is a sign-up form on the Penumbra web site that anyone can join to find out more information. (I did.) It seems to be a quote from Dante’s Inferno: “as phantoms frighten beasts when shadows fall.” (The same quote is hidden on the Penumbra Orlando site.) But what does that mean?

It’s likely that “Orlando’s Biggest Secret” is some kind of new experience that, according to the countdown on the Penumbra web site, will be revealed on February 15 – one week from today.

I suppose we will find out then…