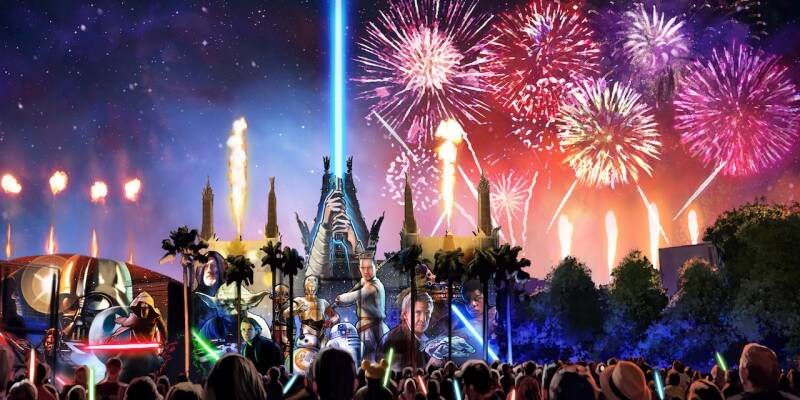 If there’s one thing that the Star Wars films have done, it’s capture the imaginations of generations of fans all over the world.

Wisely, the Disney parks have been gradually integrating the galactic soap opera more and more into their parks with the Star Wars Launch Bay at Disney’s Hollywood Studios, and Kylo Ren being revealed as a meet-and-greet character. This will all be capped off with a 14-acre expansion coming to the park in the coming years. Today, Disney just announced that plans are currently in the works for a slew of new entertainment from the Star Wars universe.

For starters, a there will be new Star Wars stage show, as well as a nighttime spectacular unlike anything anybody has ever seen before. On April 4, the all new Star Wars stage show, “Star Wars: A Galaxy Far, Far Away” will sweep audiences into the classic universe that we know and love. Disney Parks Blog reports that the new event will play out iconic moments from the film saga on-stage in front of the Chinese Theater, and will feature standout performances from Star Wars characters like Chewbacca, Darth Vader, Darth Maul, and of course Kylo Ren.

Also being added to the park will be a stormtrooper march: at various times of the day, the notorious Captain Phasma will be leading a squad of First Order stormtroopers marching in formation from Star Wars Launch Bay to the Center Stage area. Visitors will have the opportunity to see the fury and might of the First Order first-hand.

Then, when the sun sets this summer, guests will be treated to Star Wars: A Galactic Spectacular, a skybound space symphony that is looking to include one of the most elaborate fireworks and projection shows in the park’s history. Guests will gaze in awe at the twin suns of Tatooine, encounter an army of battle droids, plow through an asteroid field, blast through the trenches of the Death Star, and help the rebellion deliver the final blow to Starkiller Base. The show, which we are told will unfold through a series of acts, will be punctuated by a tower of fire, and spotlight beams that will create giant lightsabers in the sky. There will simply be nothing else like it in the galaxy.

For more news about all of the Star Wars expansions coming to the Walt Disney World Resort, stay glued to Inside The Magic — and make sure to let us know what you think in the comments below!