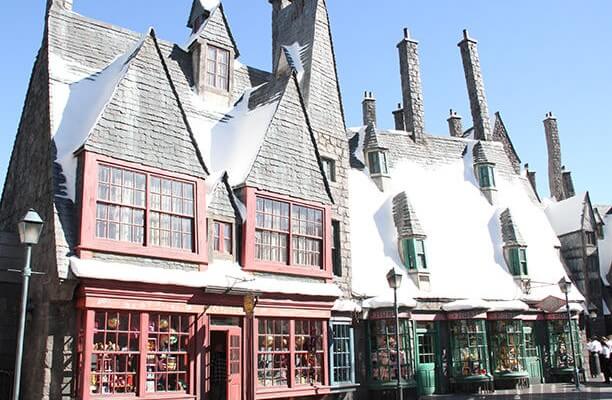 Harry Potter fans worldwide not only have a new film (“Fantastic Beasts and Where to Find Them”) and a new play (“Harry Potter and the Cursed Child”) to look forward to this year, they also have new destination to visit with Universal Studios Hollywood putting the finishing touches to their new Wizarding World of Harry Potter.

With the announced opening date of April 7 fast approaching, Entertainment Weekly has an exclusive photo gallery of the new theme park area and what a sight to behold!

Here are some of the more interesting photos from the sneak peek: Alan Gilmore, supervising art director for the Harry Potter film series and Wizarding World, gave EW a tour and summed up the look and feel of it. “Once you’ve walked through that arch, you’re now in Scotland,” he said. “You’ve traveled to J.K. Rowling’s Scottish Highlands. It’s all based in absolute reality, so it’s not really fantasy, as such; it’s more heightened reality. We’ve taken real buildings and we’ve referenced real architecture and made it more Harry Potter.” “The whole composition is, you’re set up to see Hogsmeade and then [you] see Hogwarts loom above you. It’s all designed as a giant film set,” Gilmore tells EW. “And it’s absolutely identical to the film sets. It’s the most authentic rendition that could be done.”

EW also got to take a peek at the interiors including the Three Broomsticks, where guests can order warm, cold or frozen butterbeers. Gilmore also noted the use of gas and oil lighting to retain the authenticity of the surroundings. The attention to detail is truly staggering, and that’s just from looking at the photos! Yes, the above portraits are animated and talk amongst themselves as well as about the “Forbidden Journey” attraction. The sorting hat will dispense advice for guests about to embark on the “Harry Potter and the Forbidden Journey” attraction. Yes, that’s Hagrid’s Hut complete with some impressive looking pumpkins. It’s located near “Flight of the Hippogriff” ride, Universal Studios Hollywood’s first outdoor roller coaster which, according to EW, Hagrid himself built out of wicker. So who’s ready to board the Hogwarts Express? Gilmore points out to EW that some of the props from the actual movie, such as the overhead luggage rack shown here, have been mixed in to the decor.

Head on over to EW for the full gallery as await the April 4 grand opening.