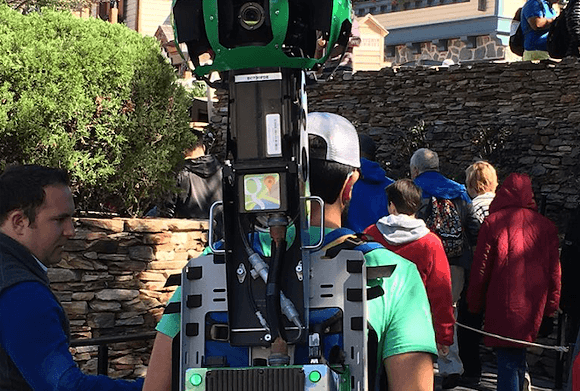 OK, maybe it’s not that intense. But according to a ton of theme park guests on social media, the Google Maps guy was recently spotted waddling around Disney’s Magic Kingdom. They could tell by the giant lollipop-esque camera sticking out of his back. This certainly indicates a collaboration between Disney and Google, and that camera definitely involves a 360° view designed for Google Street View. We definitely don’t know when this will all go live and nothing has been confirmed by Disney, so all we have now is mystery and speculation. As you probably know, Google Maps is universally famous for their fascinating 360° views/tours of classic landmarks, and otherwise potentially impenetrable geographical locations. Where do you think Google Maps guy will photograph next in the Walt Disney World resort? Is there a right experience you would want to see a 360° view of? Let us know your thoughts in the comments below!